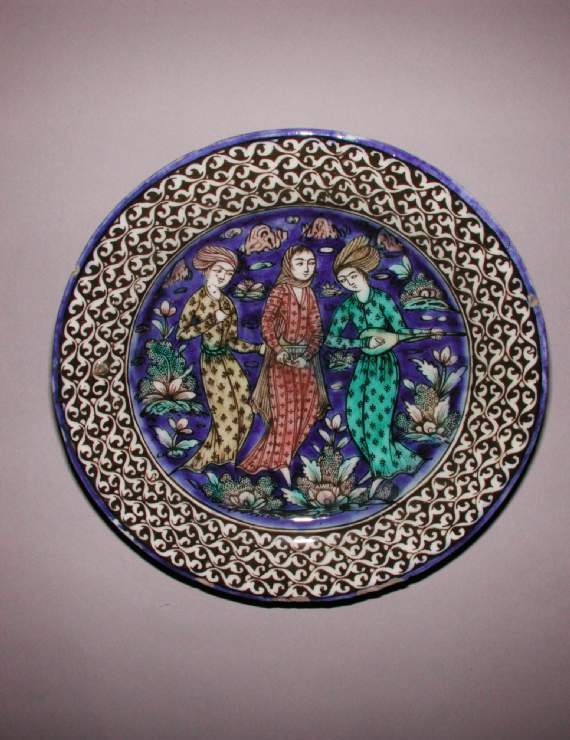 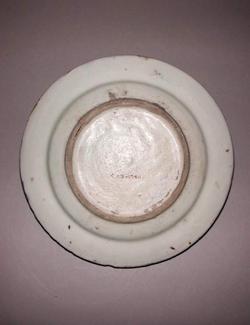 Potter: Ἁli Mohammed Isfahani (Possibly, or one of his follow)

Fritware painted in four colours under a colourless glaze, white on exterior

Fritware, probably mould made, painted in black, blue, yellow, pink and turquoise under a slightly pitted and cracked colourless glaze coloured white on the exterior.
Shape:wide flange rim descends via a carination onto a shallow convex body sitting on a low foot ring
Interior : the rim is painted with a blue line above a split leaf palmette border reserved in black. On the body, reserved in blue, three figures are outlined in black wearing long robes with floral patterns in yellow, pink or turquoise. The central female figure wears a hijab, while the flanking male figures wear turbans; one of them plays a lute. Painted in the background, rocky outcrops some with floral sprays. A scar mark on the rim indicates contact with another object in the kiln.
Exterior: undecorated except for a white glaze, this covers the surface unevenly except for the rim of the foot ring.

Given by Mr Phillip McClean

Method of acquisition: Given (1996) by McClean, Philip

Moulding : Fritware, probably mould made, painted in black, blue, yellow, pink and turquoise under a slightly pitted and cracked colourless or white glaze