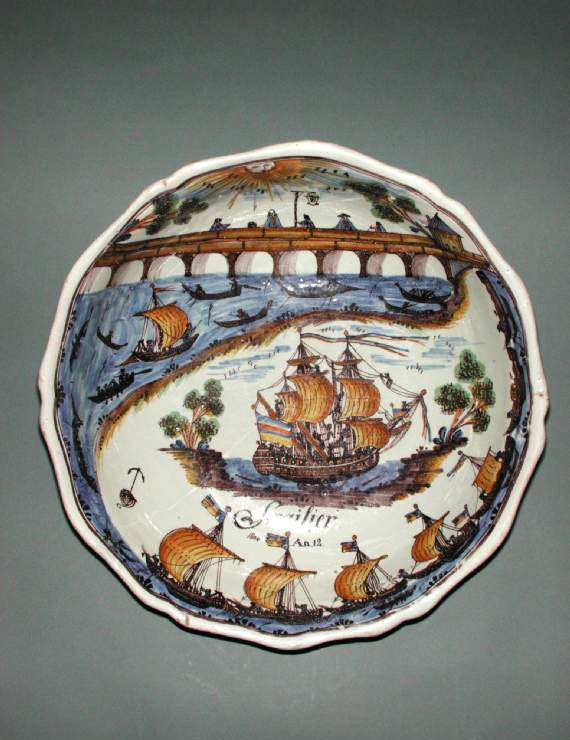 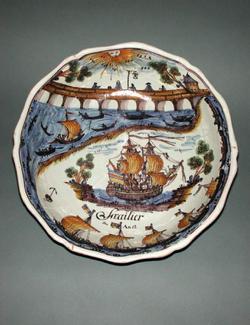 Bowl of tin-glazed earthenware (faïence), painted in polychrome high temperature colours with the bridge at Nevers and shipping on the river Loire, and inscribed 'Francois/Frailier/1804 An 12'

Earthenware, moulded, tin-glazed, and painted in blue, olive-green, two shades of brownish-yellow, and manganese-purple. Circular with a wavy rim, and deep curved and obliquely fluted sides, standing on a foortring pierced by two holes for suspension. Decorated at the top with the sun shining over the Pont de Nevers which has a lantern in the middle and is flanked by trees. Five figures are crossing the bridge. Below there are small boats on the river Loire, one with a sail. The river curves round the circumference and has five larger sailing boats round the lower edge, with other boats laden with barrels in tow. In the middle there is double-masted frigate flying the French tricolour flag, flanked by trees. Below the ship is the inscription 'Francois/Frailier/1804 An 12' (year 12).

Early 19th Century
Napoleon I
Production date: AD 1804 : The bowl was made in the year in which Napoléon was crowned Emperor of the French, but the date 1804 is recorded as Year 12 according to the Revolutionary Calendar which had been introduced by decree on 5 October 1793, and backdated to 22 Spetember 1792. That year became Year 1 of the new era, and Sundays and the seven day week were abolished in favour of a ten day cycle. The new Calendar was unpopular and unworkable despite coercion to enforce adherence to it, and modifications were made to it in 1799 and 1800. Finally in September 1805 a decree restored Sunday as the day of rest, and the Gregorian Calendar was reinstated on 1 January 1806. 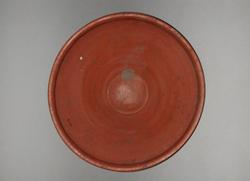