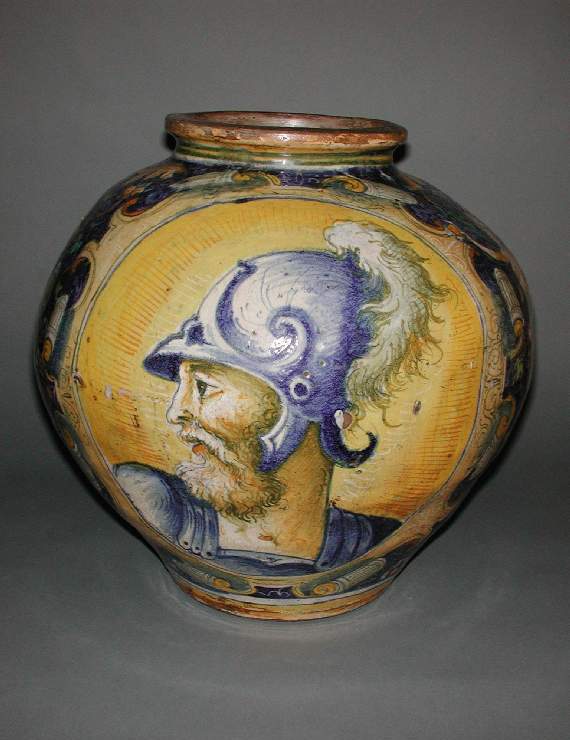 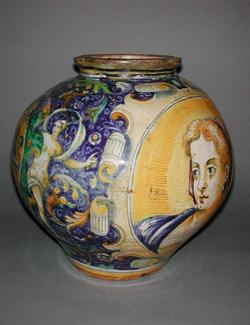 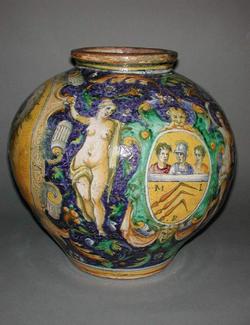 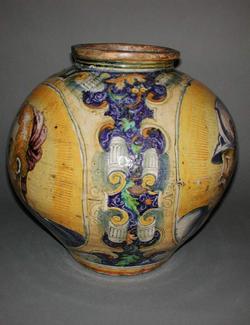 Earthenware, tin-glazed on the exterior and interior; base unglazed. Painted in blue, green, yellow, orange, manganese-purple, dark grey, and white. Bulbous ovoid body with a short neck and flat, slightly everted rim.
On the front, supported by female nudes, is a cartouche with a mask at the top and the bottom, enclosing an oval shield charged with the arms per fess, in chief three busts, a helmeted Roman soldier between two civilians, in base or three broken lances gules (shown orange) with the letters M L over R, overall a fess argent. On the right and left are circular panels; one containing a bust of a woman three-quarters to left, wearing a purple headdress, a blue earring and a blue decolleté bodice, the other, a bust of a Roman soldier with his head in profile to left, wearing a blue helmet and armour. Both are reserved in yellow grounds decorated with orange and white striations. The rest of the surface is decorated with scrolling foliage and cornucopiae reserved in a thick, dark blue ground, incised here and there with tendrils. There are orange, blue, and yellow horizontal bands round the base and a yellow between blue round the neck.

Maestro Domenego was probably born in the early 1520s as he was already married to Catharina, eldest daughter of the potter Maestro Jacomo of Pesaro, when the latter made his will in January 1544. It is assumed that he worked in the family business in Venice until the deaths of Jacomo and his son Gasparo within a few months of each other in 1546 and then set up his own workshop. He was probably the 'domenego depentor over bochaler' (painter or potter) who was a beneficiary of the will, dated 22 December 1547, of a Venetian painter, Zouan Maria fu Giambattista della Giudecca. His documentary pieces range in date from 1562 to 1568/9 and two of them dated 1568 are signed as made in a workshop in the San Polo area. He probably died between 1568 and 1574, as his name does not appear in the register of deaths of the parish of San Polo which began in 1575, unless he moved elsewhere. His workshop produced dishes, and huge numbers of albarelli and bulbous storage jars, many of them decorated in a distinctive male or female busts enclosed by scrolled frames surrounded by foliage reserved in a blue ground. The unidentified coat-of-arms on this jar also appears on a spouted pharmacy jar formerly in the Spolvieri collection, a spouted pharmacy jar in the Musée Municipal, Laon, an albarello in the Musée national de Céramique, Sèvres (MNC 4642), and on a jar sold by Christie's London on 18 December 2006, lot 22 (see Documentation).