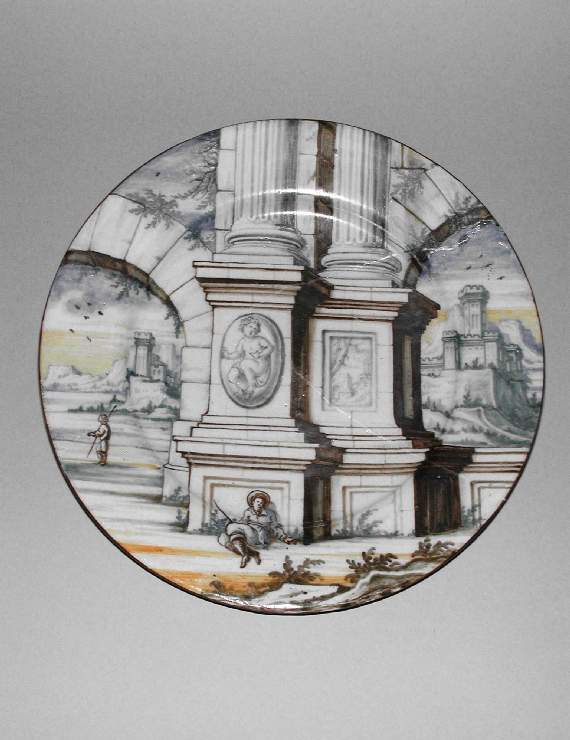 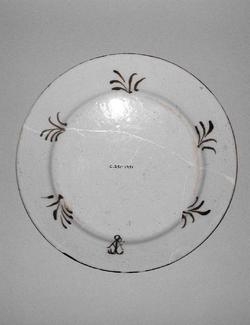 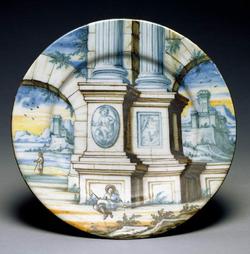 Maiolica plate, painted in polychrome with a ruined arcade with two arches, giving views of distant castles and mountains.

Earthenware, tin-glazed overall; three stilt marks on the reverse of the well. Painted in greyish-blue, greenish-grey, yellow, orange, and brown.
Shape 65. Circular with gently sloping rim and wide shallow well.
A ruined arcade with two arches giving views of distant castles and mountains. Between the arches there are two fluted columns on pedestals, one decorated with an oval relief of a putto, the other with a rectangular landscape. In the foreground a man reclines against the first column, and another man holding a staff and backing the viewer stands further back to the left. A brown band encircles the rim. The back is decorated in brown with five simplified plants and a mark comprising AF on either side of the shank of an anchor or grapnel.

History note: Thomas Sutton; Christie's, 8 March 1934, Catalogue of Chinese porcelain & furniture the property of the Rt Hon. the Viscount Barrington and porcelain, faience, decorative objects and furniture, Eastern rugs and tapestry the properties of Thomas Whitney Esq., deceased, a lady of title and various other sources, lot 57; H.S. Reitlinger (d.1950); the Reitlinger Trust, Maidenhead, from which transferred in 1991.

Formerly attributed to Angarano, or to the Manardi factory in Bassano

Inscription present: on either side of the shank of an anchor or grapnel