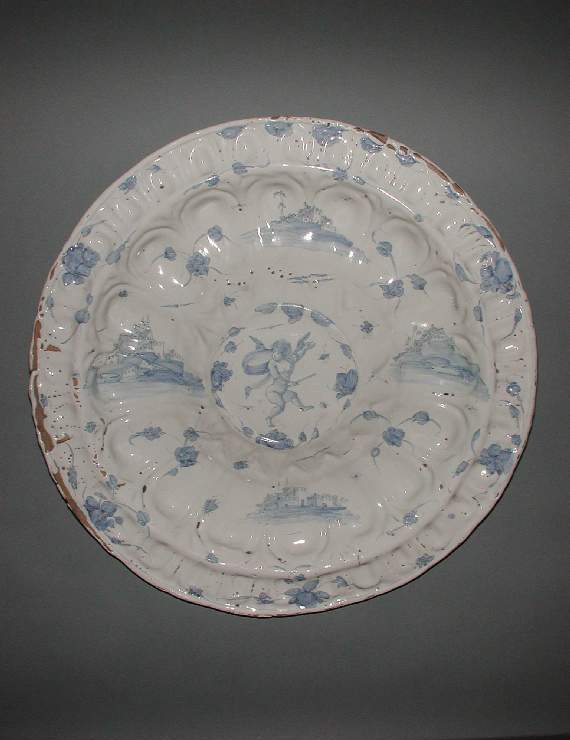 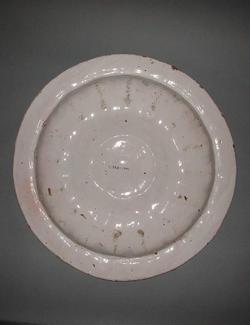 Maiolica basin for ewer, painted in pale blue with, in the middle, a putto, surrounded by insects, leaves, fruit and buildings in landscapes.

Buff earthenware, covered overall with thick tin-glaze, which has crawled on the left and right of the front, leaving several small bare areas. The glaze on both sides has many pinholes. Painted in pale blue.
Circular with a narrow rim, shallow gadrooned sides, and convex centre with a circular emplacement for a ewer, surrounded by radiating petals. The basin has warped in firing.
In the middle inside a circle, a putto stands holding a sword or baton, surrounded by insects, leaves and fruit. In the well are four vignettes of buildings in landscapes. The rest of the surface is scattered with detached stylised floral sprays and insects. A narrow band encircles the outer edge.

Designs comprising vignettes of buildings in landscapes, figures, detached floral sprigs, and insects strewn over the surface, 'a tappezzeria', were among the most common types of decoration on Ligurian pharmaceutical and domestic maiolica during the second half of the seventeenth, and early eighteenth, century. This style of decoration spread to other maiolica centres, and the shape of this basin suggests that it was probably made in Deruta

Moulding : Buff earthenware, covered overall with thick tin-glaze, which has crawled on the left and right of the front, leaving several small bare areas. The glaze on both sides has many pinholes. Painted in pale blue.
Tin-glazing 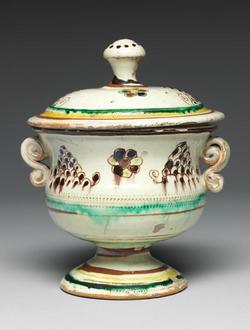 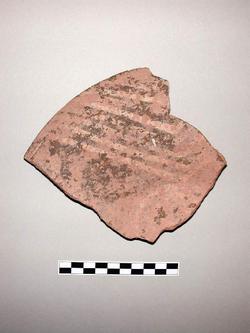 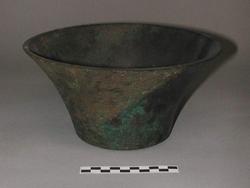 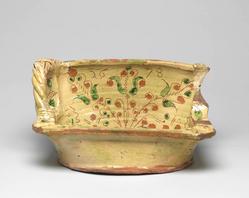