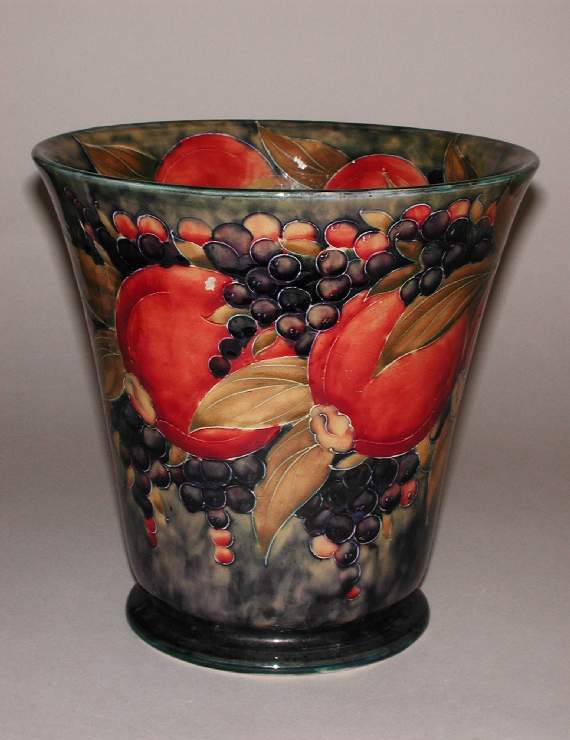 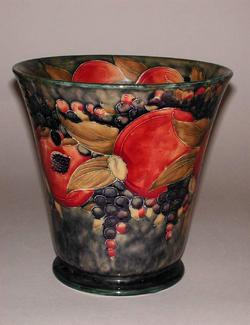 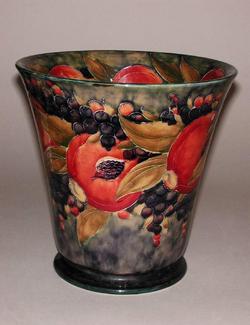 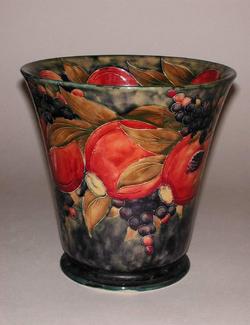 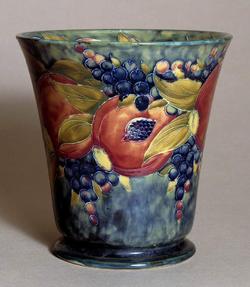 The vase, an inverted bell-shape, is decorated on the outside with a garland of six red pomegranates, yellow-green leaves and purple, cream and red grapes, against a mottled blue-green ground; two of the pomegranates are split to show their seeds. The colours are rich, but sparingly applied so that the cream earthenware body shows through. On the inside is a similar garland, but with fewer grapes, on a thin coating of the mottled blue-green which covers the whole surface. The vase sits on a short, flared foot. The underside is slightly recessed and glazed, though not coloured.

History note: Given by Mrs Maurice Hill, July 1983; previously owned by her mother.

Given by Mrs Maurice Hill

Method of acquisition: Given (1983) by Hill, Maurice, Mrs

William Moorcroft (1872-1945), the son of a potteries artist and designer, trained at Burslem School of Art and in London and Paris. From c.1897-1913 he was chief designer for James Macintyre & Co.’s new Art Pottery department, in Burslem. His designs were sold through Tiffany of New York, Liberty of London and other prestigious stores. In 1913, Macintyre’s reverted to industrial wares and some thirty workers transferred to a newly established Moorcroft Pottery, in Sandbach Road, Cobridge, set up with financial support from Liberty’s; both businesses continue today. Moorcroft designed both the shape and decoration of his pottery, each complementing the other, and experimented widely with glazes and decorating processes. He favoured curvilinear, naturalistic forms and by 1910-11, when ‘Pomegranate’ design was introduced, was using rich colours applied in bold, sweeping designs. The light slip-trailing enhances the tonal variety, by allowing some colours to merge together. An earlier version used a mottled yellowish ground. 'Pomegranate', sold at Liberty’s under the trade name 'Murena', became one of Moorcroft’s most popular designs and continued in (hand-thrown) production at the new pottery. During the 1920s, unmarked imitation 'Pomegranate' wares were produced by a local rival.

Inscription present: green script signature in use until c.1920 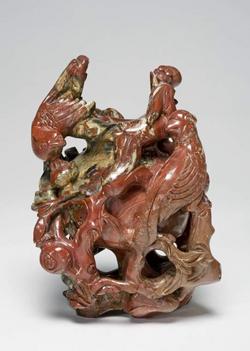 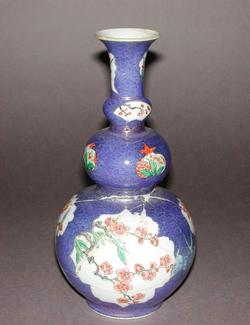 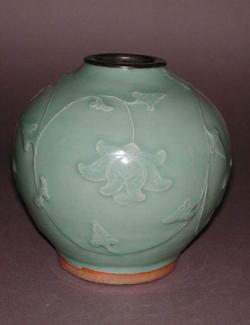 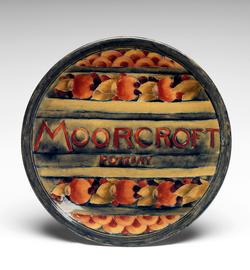