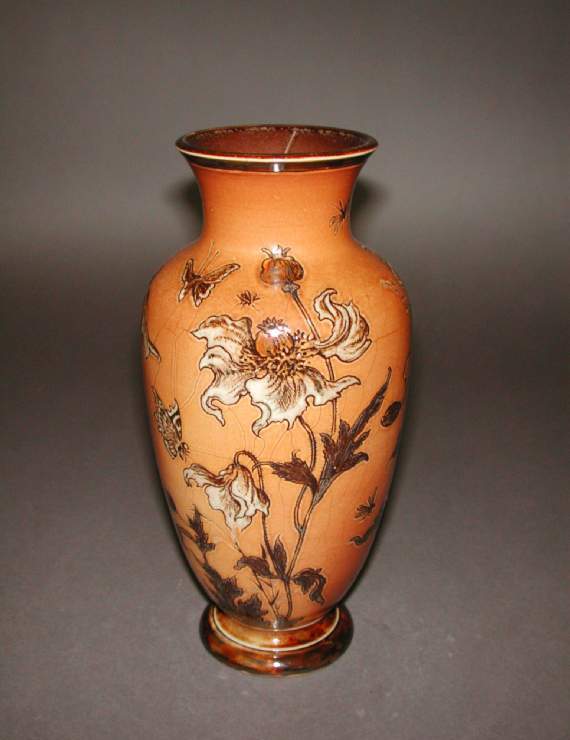 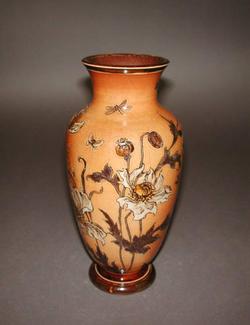 Thrown and salt-glazed stoneware vase of elongated ovoid shape on a splayed foot, with gently flaring neck. Covered with pinkish yellow-ochre slip, which gives the appearance of pig-skin or pale leather. Incised decoration, filled with creamy-white slip and with additional grey and brown colours, depicting naturalistic flowers, insects, buds and leaves. The foot, external rim and interior of neck are coloured brown. The glaze is crackled. The underside is flat and glazed, with a raised rim and the makers' name, and date 5-1901, incised in script.

Robert Wallace Martin (1843-24), Walter (1857-1912) and Edwin (1860-1915) were amongst the first ‘artist-potters’ of the late nineteenth century. They designed, made and decorated their own ornamental salt-glazed stoneware, originally using facilities at C.J.C.Bailey’s Fulham Pottery and, briefly, at Shepherd’s Bush. In 1877, they opened their own pottery at Southall, Middlesex, and by 1882 were producing some 5,000 pieces a year. Wallace had originally trained as a sculptor, exhibiting his work at the Royal Academy and elsewhere from c.1863. His younger brothers had learned their skills at Doulton’s, Walter as a thrower and chemist, Edwin as a decorator. Modelled work is generally attributed to Wallace, but otherwise it is thought that the three learned from each other, exchanging skills and sharing roles. A fourth brother, Charles (1846-1910), sold the products – known as ‘Martin-ware’ – from a shop at Brownlow Street, London.

This is one of a number of examples of Martin Brothers’ work decorated with slip painted over the whole surface and an incised pattern filled with clay slip. These techniques, which require the decorator and potter to work closely together, and the naturalistic design which follows and accentuates the form of the vase, suggest the influence of Japanese pottery.

Inscription present: s of Bros is raised, Southall has a squiggly line below