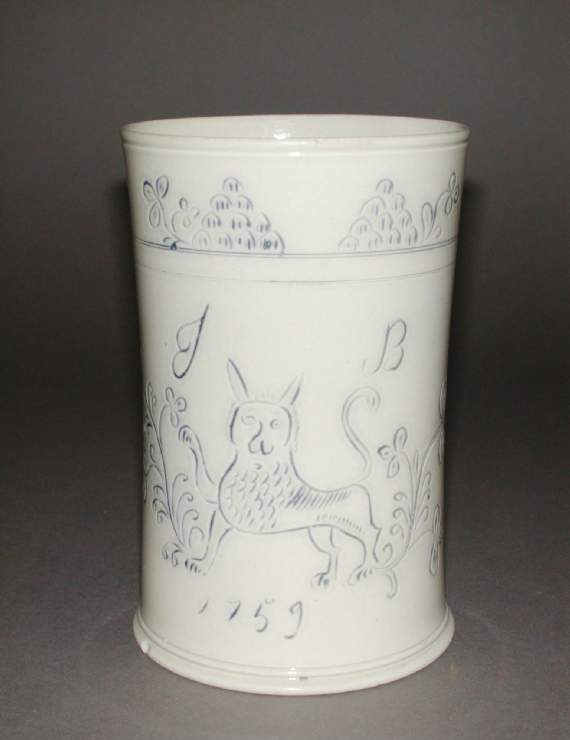 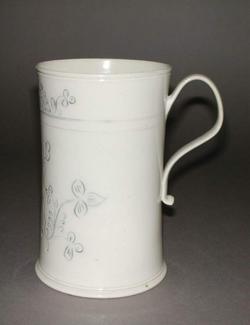 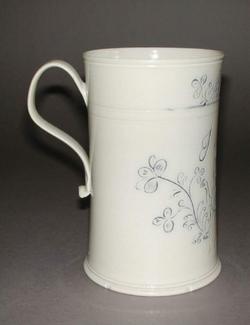 White salt-glazed stoneware with scratch-blue decoration of a lion, foliage, and inscription, 'J B' and '1759'

White stoneware, thrown,with applied handle, and scratch-blue decoration, under salt-glaze. The mug is cylindrical but not quite circular at the top. Its sides slope outwards a little towards the projecting base. The strap handle has an upward kick at the lower end. The front is decorated in scratch-blue technique in greyish-blue with a stylized lion flanked by sprays of foliage. Above are the initials J B (script J) and below, the date '1759'. Above these there are two horizontal bands level with the top of the handle, above which are two triangular mounds of stones (?) with a plant on either side.

The lion, 'though uncrowned, may refer to the King of Prussia, Britain's ally in the Seven Years' War (1756-62). A mug in the British Museum, (1938,0314.26) is decorated in scratch blue with a crowned lion over the date '1759', and 'Good Success to the king/of Prussia' below a crowned lion. If the initials JB stood for a potter, rather than another person who owned the mug, they might stand for John Baddeley (1725/6-1771) who is known to have made salt-glazed stoneware in the 1750s and 1760s. A salt-glazed stoneware tureen, cover and stand incised ' JB' on the underside of the cover, and 'JB 1763' on the base is in the Victoria & Albert Museum (2169-B-1901). It is more usual to find the potter's initials or name on the base of objects. If the initials referred to the potter, there were several others in the area who had the same initials, such as, James Bold, Joseph Bucknall, and John Brindley, who are known to have been working in the 1760s. .