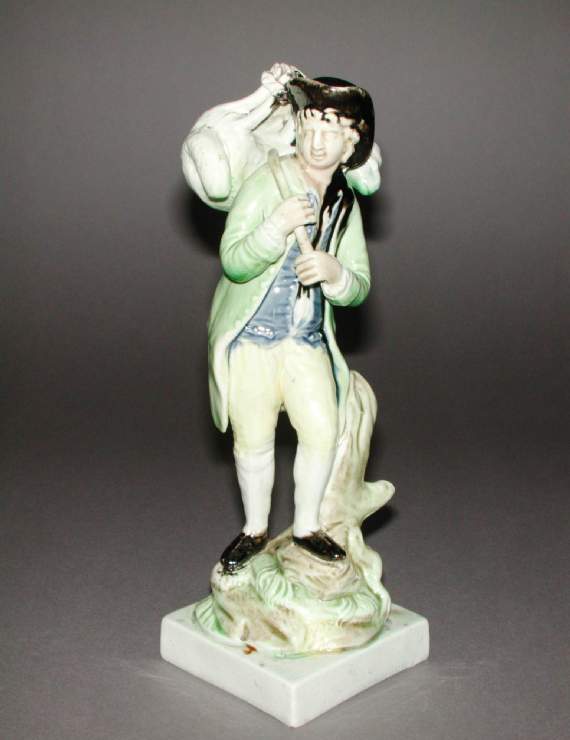 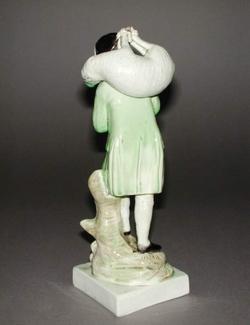 Cream earthenware, moulded in parts, assembled, and decorated with translucent bluish, and greyish-blue, pale green, pale yellow, pale brown, and black lead-glazes. The figure is supported on a low square base with straight sides, which is hollow underneath and has a central ventilation hole in the middle. The youthful shepherd stands on a rocky and grassy mound beside a tree stump. He has his left foot forward, as if he has just stepped onto one of the rocks, and leans forward slightly because of the weight of the sheep carried over his shoulders.Its feet are tied together by a rope, which he grasps in both hands. His head is turned three-quarters to his right. He wears a black tricorne hat, a blue waistcoat under a green coat, pale yellow breeches, and black shoes. The black glaze on his hat has run down over his left shoulder during firing.

This figure represents the Parable of the Lost Sheep in the Gospel of St Luke, 15: 3-7, and in St Matthew, 18: 10-14. It was paired with a female figure representing the Parable of the Lost Piece of Silver (see C.42-1930). The figures were probably made by Ralph Wood II, possibly during his partnership with his cousin, Enoch Wood ,c. 1783-9, or when potting on his own between then and his death in 1795. 'Men with lost sheep, costing 9d each were mentioned in an order from Josiah and Thomas Wedgwood (Wedgwood MSS 11496.12) dated 16 November 1783, and a pair of 'Man with lost sheep & Woman with lost piece cold.' (coloured), costing 2s.0d. were bought from Ralph Wood by his brother, the potter, John Wood, and were recorded in his sales ledger on 25 January 1787. The models may have continued to be made by Ralph Wood III from 1795 until his death in 1801. An example of each figure marked 'Ra.Wood/Burslem' was recorded by Frank Falkener in 1912. 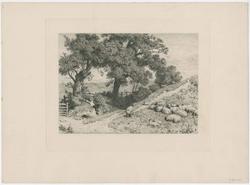 Landscape with sheep and shepherd 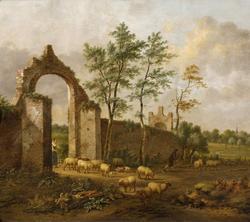 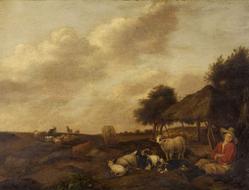 Sheep and goats with a shepherd 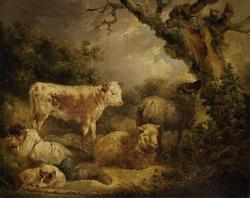