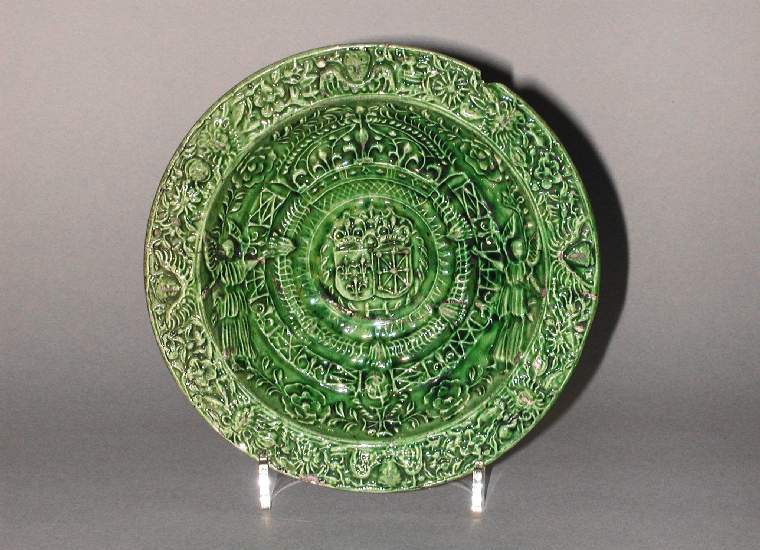 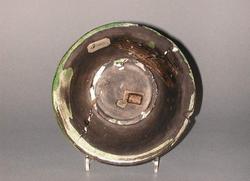 White earthenware, moulded in relief internally with the adjacent arms of Henry IV (1553-161) as King of France and Navarre, surrounded by other motifs, and lead-glazed green; reverse unglazed.

White earthenware, moulded with relief decoration on the inside and covered with green lead-glaze which extends unevenly for a little way over the edge on the back; the rest is unglazed and appears dark brownish-grey. Circular with a narrow rim, and deep well with a slight boss in the centre, standing on a footring. At a later date this has been pierced by a hole at the top and another at bottom when the design is the right way up. The boss is decorated with the adjacent arms of France and Navarre below crowns. The arms are flanked by leaves broken by an 'H' at the bottom for Henry IV (1553-1610) . This is surrounded by a sunburst, and the double chain of the Order of the Saint Esprit with the French royal crown at the top. On either side are two angels with a rose spray above and below each of them. On the border there are four winged cherubs heads alternating with four lion's masks separated by stylized flowers. The reverse is undecorated.

Attributed to either Beauvais or the region of Saintonges. This Protestant area benefited from the Edict of Nantes in 1598 which permitted Huguenots to follow their religion,. The date of the dish is uncertain, it was probably made in the 17th century.

Press-moulding : White earthenware, press-moulded, and lead-glazed green on the front

Inscription present: the last three words are in italics