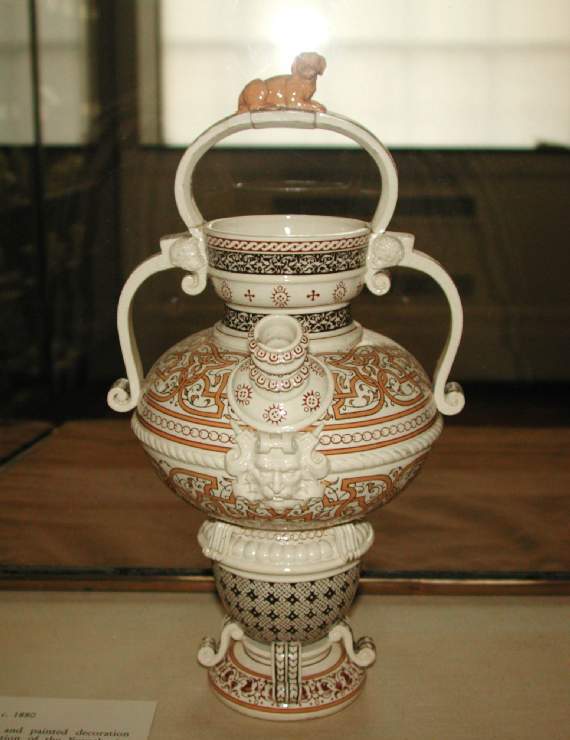 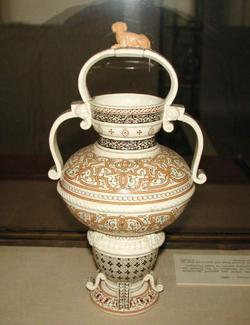 Gourd-shaped ewer on a domed foot, with raised neck and a round spout which juts from the upper body. Two strap handles rejoin the body at the rim and are then joined by a continuous loop across the top. The surface is covered with incised and inlaid clay patterns, in light and dark brown, which imitate those used on 16th-century ‘Henri II’ or ‘St Porchaire’ ware. A light brown modelled dog sits atop the loop handle and unpainted relief decoration, including a bearded mask, putti and a rope circling the upper body; four incised straps decorate the foot. The underside is recessed, with a small central vent hole.

Minton launched wares ‘coloured in the Majolica style’ at the Great Exhibition of 1851, to great acclaim. The new product took inspiration from Renaissance maiolica, but used brightly coloured lead-glazes and favoured sculptural forms rather than finely painted decoration. The Minton Art Director Léon Arnoux (1816-1902), however, sought to more directly reproduce Renaissance techniques and shapes, and in 1858 produced his first imitation of 16th-century French ‘Henri II’ inlaid earthenware (also known as ‘Saint Porchaire’ ware or ‘Faience d’Oiron’). Many of Arnoux’s designs. Charles Toft Snr. (1832-1909), who later became chief modeller for Wedgwood, specialised in realising this type of decoration during the 1860s-70s, drawing on Delange’s book of all the known examples, published in 1861. Minton continued to offer ‘Henri II’ ware until c.1893.

Only a limited number of pieces was produced, however, and mainly for display. ‘Henri II’ ware was fragile and, as Colin Minton Campbell noted, ‘it is very expensive, from the inlaying of the clays, and the effect is not equal to the cost’ (Jones, 150). The geometric ornamentation was made by pressing metal dies into the unfired surface and then filling the depressions with clay. The relief decorations were moulded and applied. Although unlike Majolica ware in appearance, the glaze used is similar.

Several versions of this example exist, including at the V & A Museum (CIRC.825-1920). These generally have an additional foot-plate and more painting on the relief decoration. The Fitzwilliam Museum also holds an piece of original ‘Henri II’ ware, the lower part of a ewer, c.1540-60 (EC.2-1940). 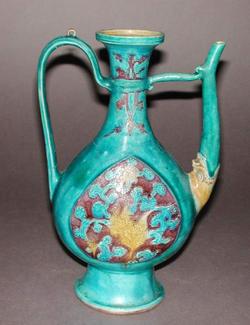 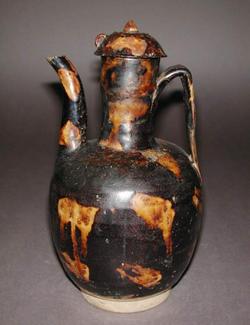 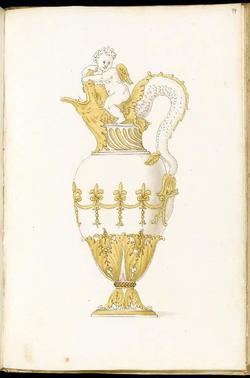 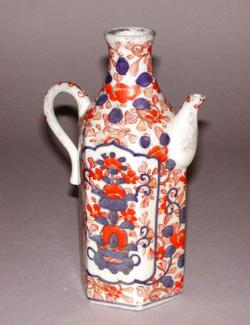