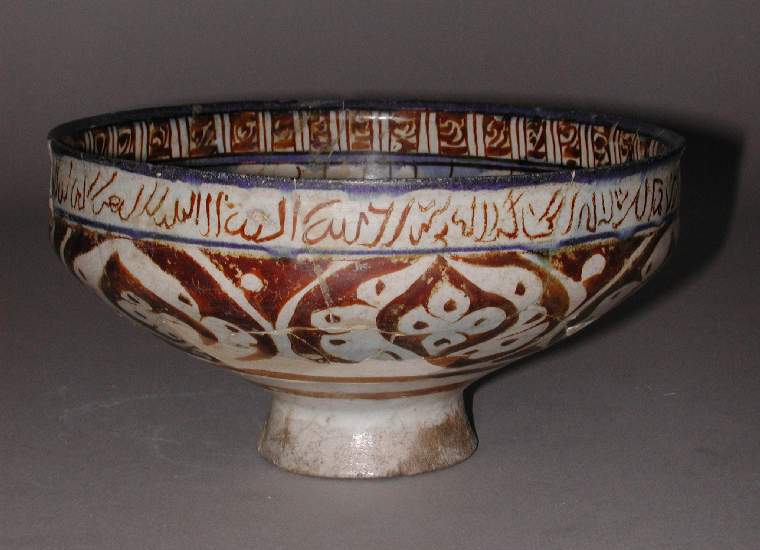 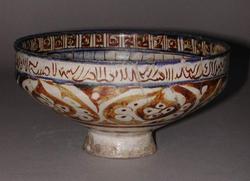 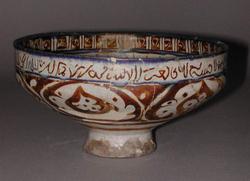 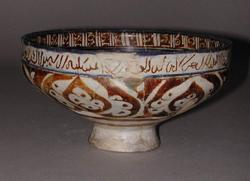 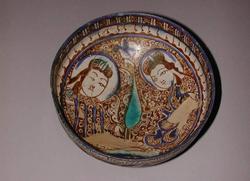 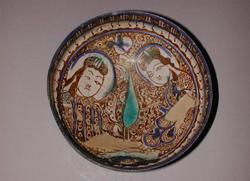 Fritware with white glaze painted in blue, turquoise and lustre

Buff fritware, wheel thrown, with blue and turquoise pigment under an opaque white, slightly crazed glaze, over-painted in brown lustre
Shape: carinated bowl with slightly everted rim, straight neck descending via steeply sloping sides onto a moderately high foot ring
Interior: two friezes on the neck are separated and enclosed by blue painted lines. These friezes contain either straight and wavey lines or dots and scrolling foliage. The central decoration depicts two seated opposing figures painted in reserve against a lustred background filled with scrolling leaves, flowers and articulated half palmettes. Both figures wear tunics decorated with scrolls and hats, all highlighted by blue pigment. Between the figures a pear shaped tree is coloured with turquoise; above them a bird is highlighted in blue; below them a fish swims in a blue painted pool. Exterior: a frieze of Arabic script (cursive) on the neck is painted in lustre and enclosed by two concentric painted blue lines. On the body a repeating rosette pattern, with each petal containing a dot, is painted in reserve against a solid lustred background, below a single concentric line of lustre. Glaze covers the body but runs unevenly over the foot ring, although the underside is glazed.

Inscription present: a frieze of script on the neck is painted in lustre and enclosed by two concentric painted blue lines