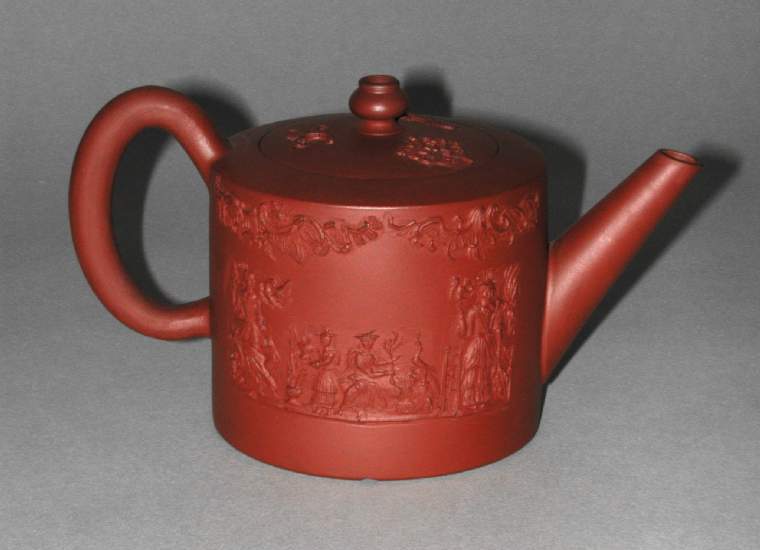 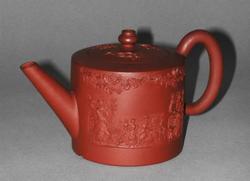 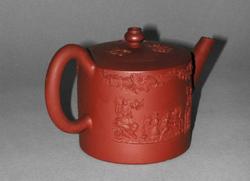 Dry-bodied red-stoneware with mould-applied relief decoration. The cylindrical body has a loop handle and straight, tapering spout with five holes in the wall behind it. The slightly convex lid has a pierced, rounded knob. In the centre of each side of the teapot is a Chinoiserie relief of a woman carrying a flower-pot standing beside another woman, who is accompanied by a peacock. On one side they are flanked by two larger female figures the one on the left seated holding a flower in her right hand with a bird flying on her left, and one on the right standing holding a large leaf in left hand and having a monkey or squirrel on her raised right hand. On the other side, they are flanked by larger standing female figures, one holding a parasol and the other a birdcage for a parrot in the air above. Above these figures there are two rococo scroll motifs. The lid is decorated with a scroll motif, a leaf, and a flower.

History note: Provenance unknown before Mr Stoner, London, who sold it for £6 on 27 May 1918 to Dr J.W.L. Glaisher, FRS, Trinity College, Cambridge

As so many potters produced ware of this kind, attribution has proved challenging. However, Robin Price has managed to divide many surviving examples of redware into groups, based on the pseudo-Chinese seal marks they use. This teapot belongs to Price’s ‘Group III’. All the wares in this group have exactly the same square seal mark with a ‘K’-like symbol in the bottom right hand corner. Many of the items in the group also share identical mould-applied reliefs, handles and spouts, suggesting they were all produced by a single manufacturer. David Barker (1991) has attributed to Group III to Thomas Barker, a potter operating in the Foley area of Fenton (now part of Stoke-on-Trent) in the 1760s and 1770s. Excavations at a site on King Street in Fenton discovered a deposit of sherds dating from c.1770, which included redware. All the redware bases discovered at the site were marked with the Group III pseudo-seal mark and many featured mould-applied reliefs identical to those used on Group III wares, including the small female figure accompanied by a peacock used on this teapot. Documentary evidence suggests that this site was the location of Thomas Barker’s pottery.

Dry-bodied (unglazed) red stonewares were produced by many potters in the mid-18th century. The wares, almost always related to the drinking of tea or coffee, imitated imported Yi-Xing red stoneware from China; for example, this teapot is marked with a pseudo-Chinese seal mark and is decorated with Chinoiserie figures. Prints and illustrated books like ‘The Ladies Amusement’ helped to spread and popularise Chinoiserie imagery inspired by oriental culture.

Inscription present: imitation Chinese seal mark in the form of a square containing 5 symbols, the bottom right of which resembles a letter ‘K’