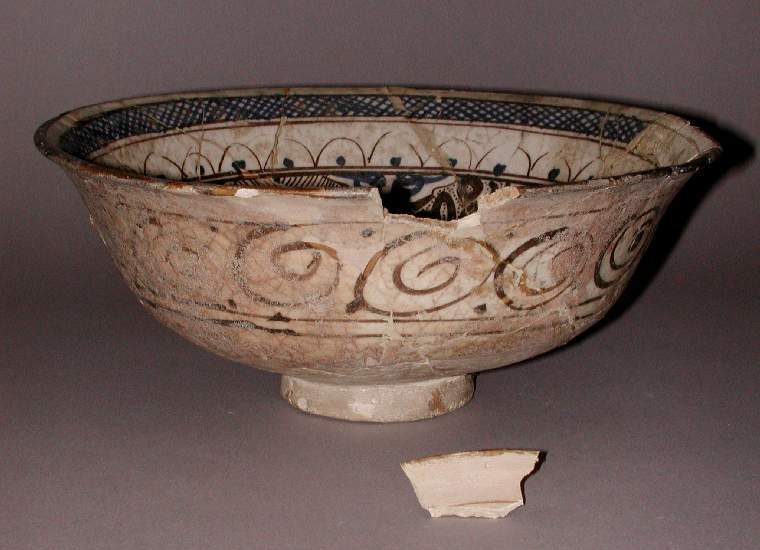 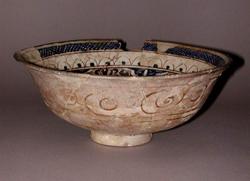 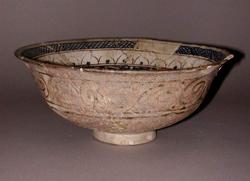 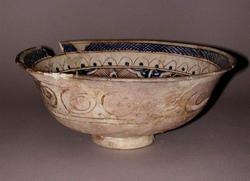 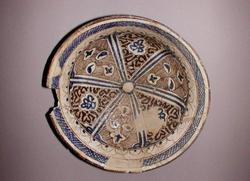 Earthenware, coated in a white slip painted blue and brown under a clear glaze

Buff earthenware, wheel thrown, coated in a white slip and painted in brown and blue under a clear, crazed glaze.
Shape: out-turned rim on a cono-segmental bowl with a low foot ring.
Interior: rim is painted with a brown band. On the neck two friezes are enclosed by thin brown concentric lines, the uppermost consists of blue cross-hatching while the lower consists of roughly drawn brown arches with a blue central dot. Radiating from a circle on the base, a blue six pointed star is defined by pairs of blue lines which terminate in scrolls. Between the arms of the star, wedge shaped panels alternate between a stylised blue palmette against a background of brown scrolling lines and dots, or blue comma and stylised fleur de lis against brown diagonal lines. Three scar marks on the base indicate the use of a tripod stacking device in the kiln.
Exterior: the brown band on the rim continues on the exterior above a frieze of brown scrolls enclosed within brown concentric lines. The glaze covers the vessel unevenly to a mid point on the body below which a white slip is visible on the remaining surface.

Throwing : Buff earthenware, wheel thrown, coated in a white slip and painted in brown and blue under a clear, crazed glaze