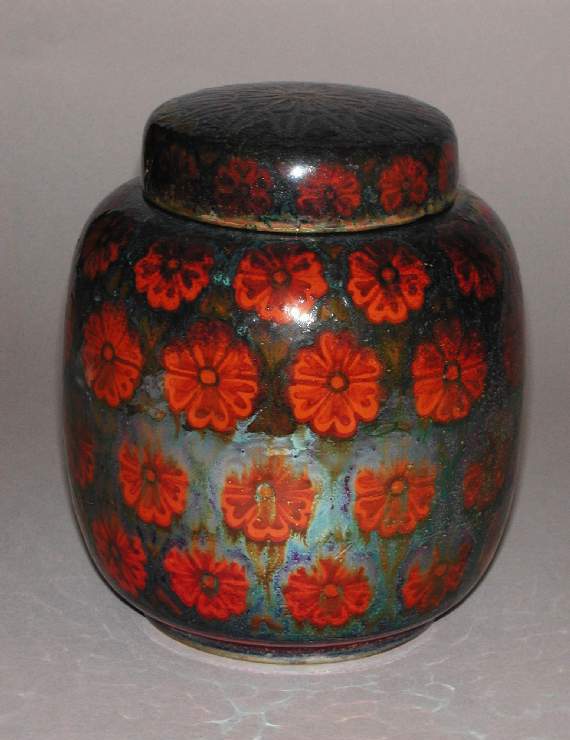 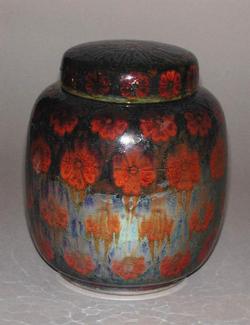 Barrel-shaped jar on a small foot-rim, with short neck and a fitted, slightly convex, cover. Thrown, white earthenware, the exterior completely covered with a dark blue lustre ground, tinged with copper-gold. The barrel body is decorated with four rows of copper, six-petalled rosette flowers. There is a further row of these around the sides of the cover, the top of which has a central, outline, design of a larger rosette, in a silver-copper coloured lustre. The inside of the lid is painted in blue lustre. The underside is flat and covered with copper-gold lustre.

History note: From the Charles and Lavinia Handley-Read Collection

Pilkington’s Tile and Pottery Company, formed in 1891/92, was one of the largest producers of decorative tiles. Lancastrian Pottery was introduced in 1904, using simple classical shapes and decorated with innovative coloured glaze effects. Designs were traced and pounced onto the pots, and the decorator was encouraged to add his individuality to that of the designer, such that no two pieces were identical. Painted lustre pottery was produced in quantity from 1906 until 1928. Pilkington’s gained a Royal Warrant in 1913, but tile manufacture dominated production after the First World War, and pottery production ceased in 1938.

William Salter Mycock (b.1872), worked for Wedgwood and as a jobbing artist before joining Pilkington’s from 1894 until 1938, originally as a tile decorator, and in the pottery from c.1906. His own designs favoured heraldry, flora, birds and ships and sometimes included gothic lettering; he also decorated work with designs by other artists, including Walter Crane. Mycock was also a water-colour painter, interested in music and literature, and a follower of Ruskin. An archive of his design sketches and source material is held by Swinton and Pendlebury Public Library. 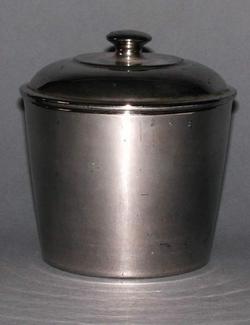 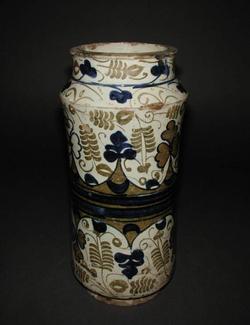 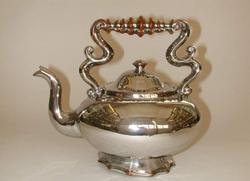 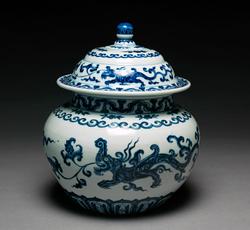