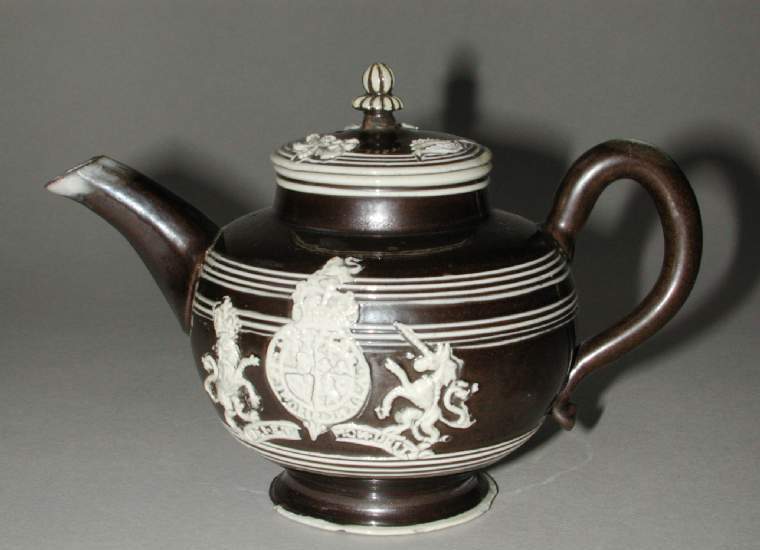 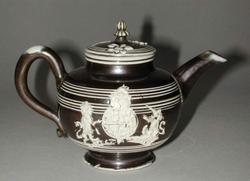 Dark brown stoneware, coated inside with white slip, turned and decorated on both sides with applied white clay reliefs of the Royal Arms with motto DEI ET MON DRIT, and salt-glazed

Dark chocolate-brown stoneware, coated inside with white slip, turned and decorated with applied white clay reliefs before salt-glazing. Globular body with curved octagonal spout, and loop handle, standing on a low foot; circular, very slightly convex cover with striped bud-shaped knob. The interior of the body is coated in white slip. On the outside there are two groups of horizontal white bands below the shoulder and above the foot, a single band round the foot,, two round the rim, one round the cover, and touches of white on the top of the handle and end of the spout. Each side is decorated with a moulded and applied relief of the Royal Arms with the motto 'DEI ET MON DRIT' (sic), and the cover with an applied fleur-de-lys, a spray of flowers, and a leaf.

This teapot is an example of a rare type of chocolate-brown salt-glazed stoneware decorated with white slip and moulded white reliefs or sprigs. Arnold Mountford associated it with a patent taken out on 24 April 1733 by Ralph Shawe (sic) for '. . .a fine body, of which a curious ware may be made, whose outside will be of true chocolate colour, striped with white, and the inside white, much resembling the brown China ware, and glazed with salt. . . .'. By 1736 other Staffordshire potters were imitating it, and Shaw sued John Mitchell of Burslem for infringing his patent. However, the judge found against him and nullifed the patent. It seems likely that Thomas Whieldon was one of the potters who made this type of stoneware as sherds have been found at the site of his pottery in Fenton Vivian which he occupied from 1747. The style of this pot indicates that it is likely to have been made in the late 1740s or early 1750s rather than the late 1730s. White reliefs of the royal arms also appear on lead-glazed redwares, such as the Fitzwilliam's teapot C.618 & A-1928. Part of an unglazed redware teapot with white reliefs of the royal arms, now in the Victoria & Albert Museum (C.83A-1925), was found with other sherds at Fenton Low on the site of a pottery leased from Whieldon briefly by William Meir and then by Edward Warburton from 1751-61.