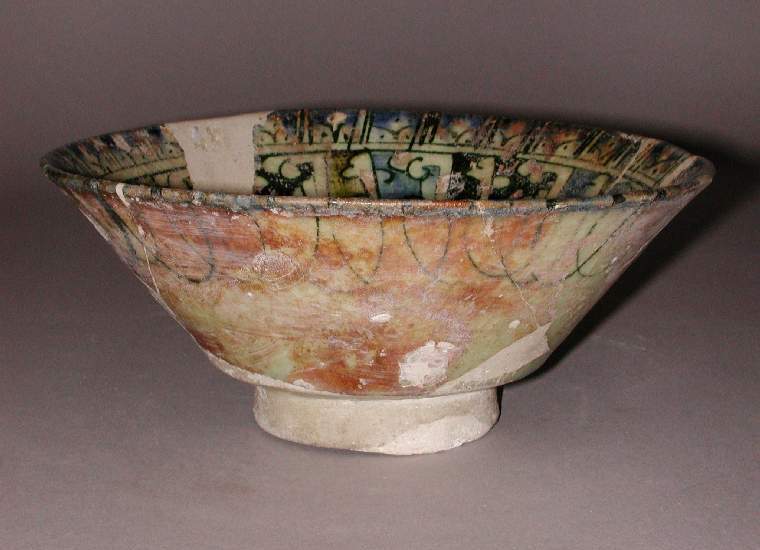 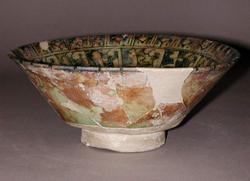 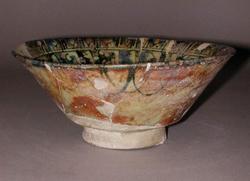 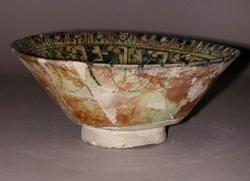 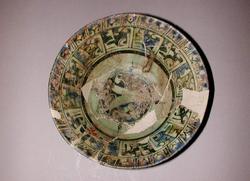 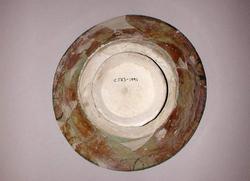 Buff fritware, painted in black and blue under a clear, slightly crazed glaze with a greenish tinge.
Shape: bi-conical bowl with plain rim and moderately high, slightly splayed, foot ring
Interior: on the rim, a black pseudo-calligraphic frieze, comprising a repeating “V” shapes and dots, is painted against a blue background, separated by vertical lines. On the body, a repeating Arabic (kufic) frieze is painted, alternately, in reserve against a black background, or outlined in black against a blue background. A wide black concentric band delineates the decoration in the base, which comprises a central roundel with scrolling vegetation, painted in reserve against a black or blue background. Black diagonal lines and commas, on the exterior of the cartouche, divide the remaining space. Glaze is pooled in the base. On the base and lower body, scar marks have formed, probably the result of contact with other vessels during firing.
Exterior: Rim is painted blue with interlocking half-oval shapes in black decorating the upper body. The glaze runs unevenly over the lower body but not below the carination.

Throwing : Buff fritware, painted in black and blue under a clear, slightly crazed glaze with a greenish tinge