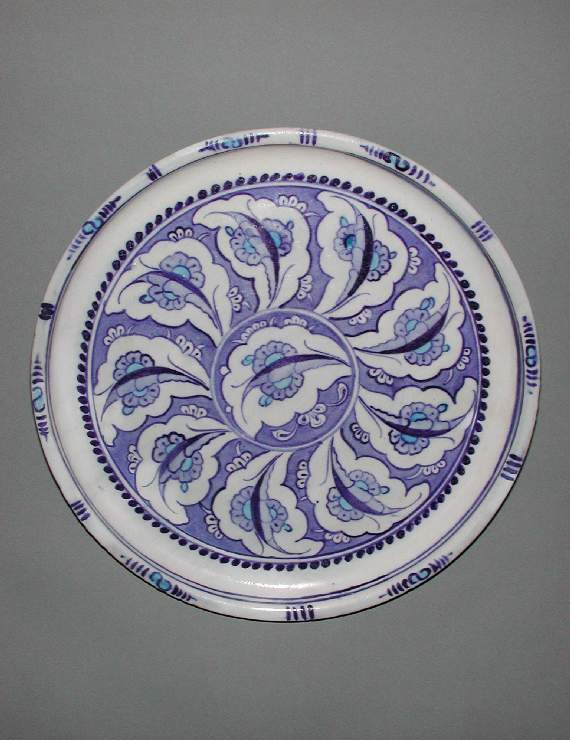 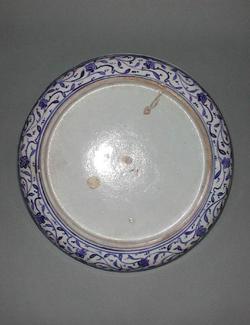 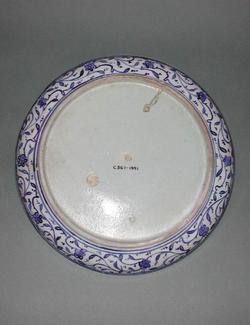 Fritware coated in a white slip and painted in two shades of blue and turquoise under a clear glaze.
Shape: flattened rim on a shallow dish with curvaceous sides and a low, wide foot ring; the interior base has a slight dimple.
Interior: on the rim groups of blue vertical dashes separate horizontal blue ‘S’ shapes highlighted with turquoise which are also surrounded by further blue dashes. On the neck, a pair of concentric lines is painted in blue. On the base, contained within a dotted roundel and painted in reserve against a blue background, lobbed cartouches with sprouting scallops contain a saz leaf overlying a rosette. This frieze of cartouches surrounds another near identical central cartouche.
Exterior: a frieze of scrolling tendrils with flowers and buds is painted on the body contained within pairs of concentric lines. Slightly uneven coverage of the glaze with small patches uncovered, as well as the rim of the foot ring.

clear, slightly uneven coverage on the exterior with small patches uncovered, as well as the rim of the foot ring Glaze white Slip Fritware

Moulding : Fritware coated in a white slip and painted in two shades of blue and turquoise under a clear glaze
Glazing (coating) Slip-coating