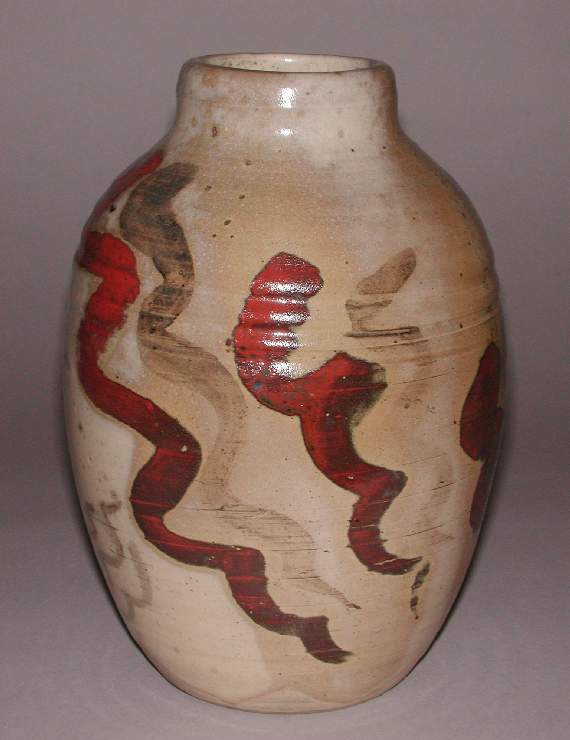 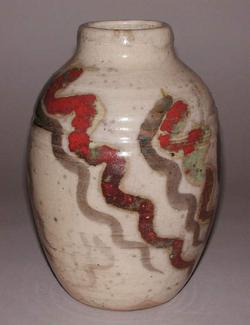 Buff stoneware, thrown, covered with beige glaze except for the base and an irregular area above it, and painted in dull red and grey, Ovoid with a short cylindrical neck and recessed base. Decorated with a geometrical pattern of diagonal wavy lines of varying widths and lengths.

Donor and date of accession unknown

Deborah N. Harding (1903-92) studied pottery at the Central School of Arts and Crafts under Dora Billington, and subsequently at the Royal College of Art. In 1909, she had moved with her parents to a new house in Westholm Green, thus becoming one of the first settlers of the new town, Letchworth. After completing her studies in London, Harding returned to Letchworth and established a pottery in The Wynd, where she produced works that were exhibited at the Arts and Crafts Exhibition Society, sold through the Three Shields Gallery and featured in The Studio magazine and Decorative Arts Yearbook (1930). She also showed pieces in the Paris Exhibition of 1934 and in the Victoria and Albert Museum exhibition 'English Pottery Old and New' (1935).

Harding made slip-decorated earthenware and stoneware with a distinct modernist aesthetic, using pale colours and simple spiral markings. In 1933, the Three Shields Gallery, London, showed a solo exhibition of her work, which included stoneware pots similar to this example. The exhibition was reviewed in The Times as follows: ‘At the Three Shields Gallery, 8, Holland Street, Kensington, there is an exhibition of new stoneware pots in light colours – ranging from white to buff or oatmeal – by Miss Deborah N. Harding. Here again the merit is in close adaptation to domestic use, while avoiding the mechanical effect of factory production. Flower contains, in one form or another, are in the majority. For added decoration Miss Harding makes very effective use of the spiral line, comparatively slow in movement and generally well related in colour to the ground.’ (‘Two Potters’ in The Times, 10 November 1933, p. 12)

In 1935, Harding married John Hard and continued making pots until the outbreak of the Second World War, when The Wynd was requisitioned for the war effort. After the war she concentrated on bringing up her three children, and renovating the almost derelict Manor House in Bygrave, which she and her husband purchased in 1948. She later taught pottery at St Christopher’s School and made functional, domestic wares for her friends and family.