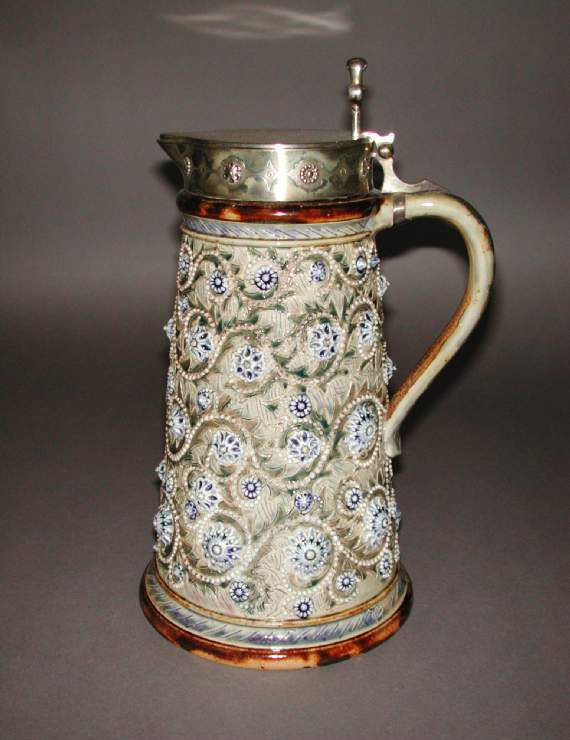 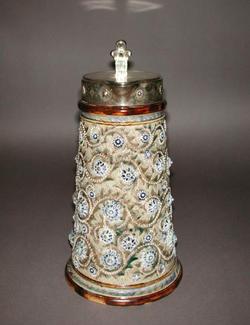 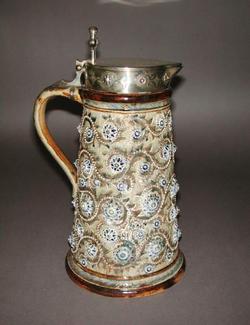 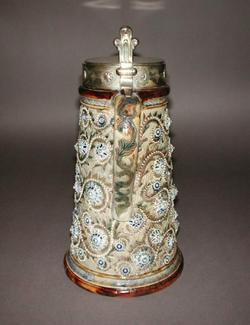 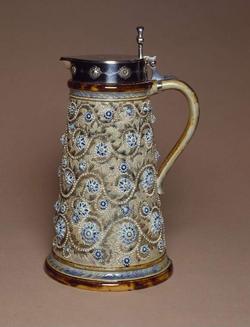 Salt-glazed stoneware jug with incised and applied decoration; silver mounts and lid, engraved with two crests and a motto.

Thrown, stoneware, cylindrical body, tapering towards the top, with thickened base and rim and applied handle. The body is decorated with an incised pattern of stylised leaves and applied strings of beadwork which wave around applied, impressed flower motifs, the latter in three sizes. An incised leaf motif runs down the outside of the handle. The whole is coated in slip, the leaves picked out in light and dark green and the flowers in blue, and edged at top and bottom with a blue rope strip and brown rim. The underside is flat and unglazed.

The neck is banded with silver, formed to a lip opposite the handle, and decorated with an engraved pattern of diamond shapes, into which eight relief flower-heads have been set. The cover is flat and engraved with: a rampant lion with a flag; an arm with a fist clenching two arrows; and the motto 'FORCE AVEC VERTU'. The hinge sits on the top of the handle, secured by a band, with a trefoil thumb-piece rising 4 cm above the lid.

Method of acquisition: Given (1971) by The Friends of the Fitzwilliam Museum

Doulton and Co, founded by John Doulton at Vauxhall, c.1815, originally specialised in utility ceramics, with some production of stoneware jugs and ornamental bottles. Henry Doulton, his son, introduced decorative stoneware at the Lambeth Art Pottery in the mid 1860s, encouraged by John Sparkes, Head of Lambeth School of Art; in all, some 400 artists were employed there, many of them Lambeth students. From 1872 the business expanded into faience and in the 1880s opened a factory at Burslem, Staffordshire, where bone china and other wares were made. In 1901, Edward VII granted the Royal warrant to the factory. Stoneware production at Lambeth reduced after 1914, and ceased in 1956.

The flagon bears the crests of Egerton Leigh of West Hall, High Leigh, Cheshire, incised on the lid. It was probably made to commemorate his marriage to Lady Elizabeth Mary, eldest daughter of the third Earl of Bantry, in 1874.

The incised, scrolling foliage, applied flower heads and beading on the body of this flagon are typical of George Tinworth’s style in the early 1870s. Tinworth (1843-1913) worked at Doulton & Co from 1866 until his death, having previously studied at Lambeth School of Art and the Royal Academy. He decorated thousands of salt-glazed stoneware pots and also made small figures of children and animals, notably a series of child musicians playing over 35 instruments. His most important commissions, however, were terracotta relief panels, of which he made some 500, including work for York Minster and for the Guards Chapel. 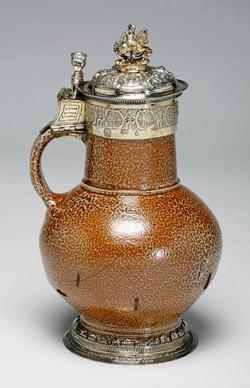 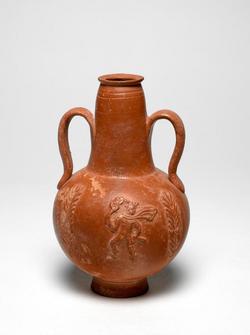 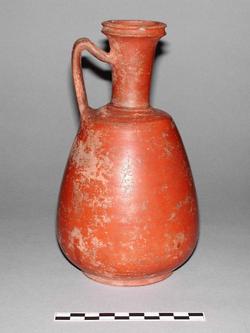 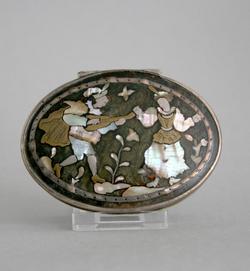