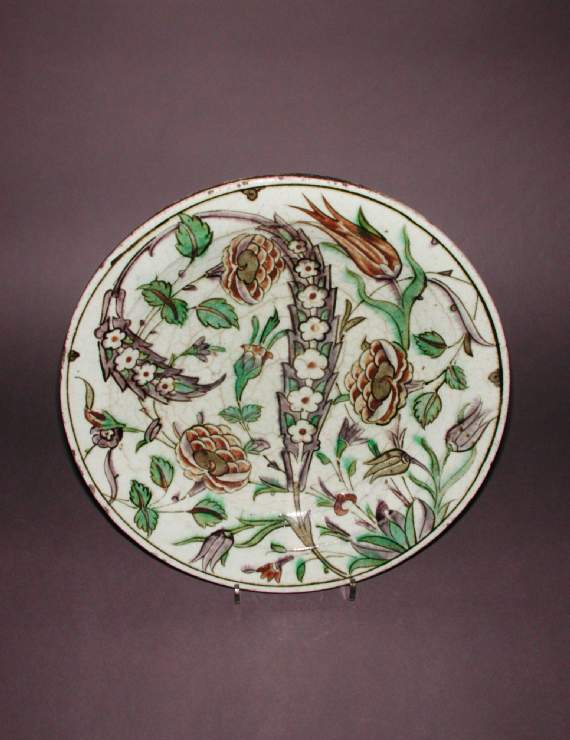 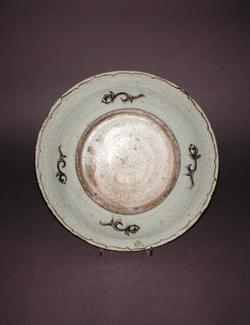 Fritware, painted in brown, green, grey and black on a white slip and under a crazed white glaze

Fritware, heavily potted and wheel thrown, coated in white slip and painted under a crazed white glaze in brown, green, and grey with black outlines.
Shape: segmental bowl with a flange rim, sits on a low, wide foot ring
Interior: a floral spray occupies the entire surface, it emanates from a grassy tuft on the rim. A central, bi-partite saz leaf is painted in grey with a central prunus spray. Brown and occasionally grey tulips and carnations scroll around the leaf. Some of these flowers are clasped by an agrafe. All decoration is outlined in black.
Exterior: a black scalloped line is painted just below the rim. On the body four scrolling palmettes are outlined in black and coloured with grey that has bled into the surrounding glaze. The underside of the foot ring is covered in a thin white glaze.

Method of acquisition: Given (1911) by The Friends of the Fitzwilliam Museum

Throwing : Fritware, heavily potted and wheel thrown, coated in white slip and painted under a crazed white glaze in brown, green, and grey with black outlines