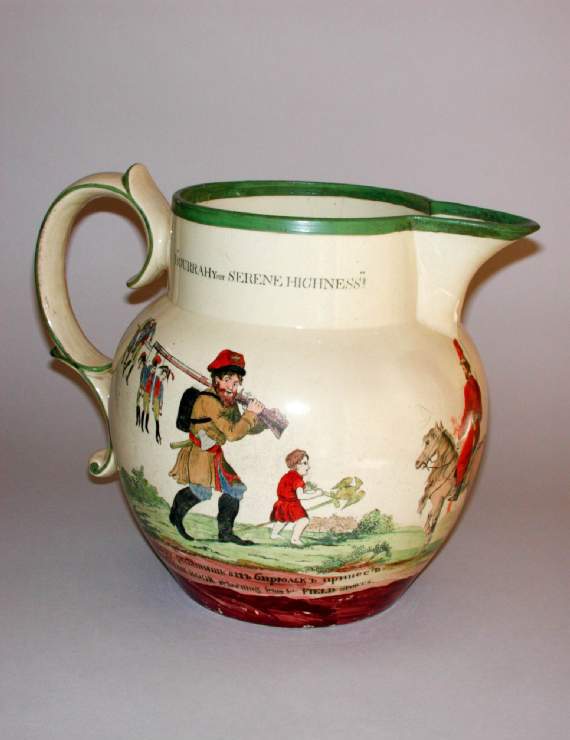 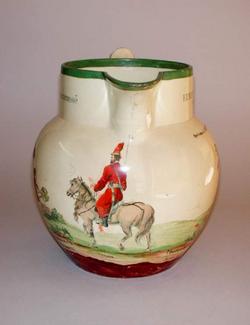 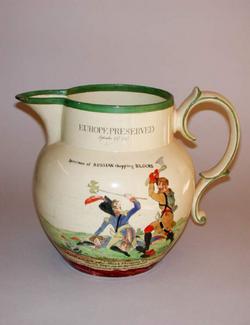 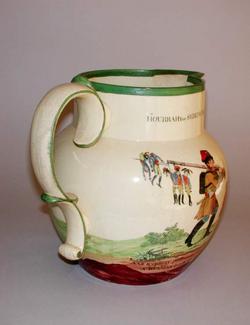 Lead-glazed creamware transfer-printed in black and coloured in enamels.

Cream-coloured earthenware covered in clear lead-glaze, transfer-printed onglaze in black and coloured in red, blue, black, green, yellow, brown and ochre enamels. The jug has a bulbous body, cyclindrical neck and scroll handle. Printed on one side of the neck of the jug is ‘EUROPE PRESERVED / September 14th 1812’. Beneath this title, on the body of the jug, is the inscription ‘Specimen of RUSSIAN chopping BLOCKS’ over a bearded Russian soldier with a sabre hanging from his belt. He raises an axe, ready to bring it down on a Napoleonic soldier, who kneels over two of his fallen comrades, both of whom have bloodied head wounds. Underneath is a Russian inscription, which translates as ‘There were hordes of you weren’t there? Well, that's the lot! That’s what you were up to, trying to hack your way through; in future you won’t give any trouble’, and an English one, which reads ‘So you’r the last! says this brave honest Man. Now Nap return to Russia if you can’. Underneath the lip of the jug is a figure mounted on a horse with a sabre hanging from his belt and a tall fur-trimmed hat; he is labelled ‘COSACK’. On the other side of the jug, '“HOURRAH Your SERENE HIGHNESS!!”’ is printed on the neck. Beneath, on the body of the jug, is a Russian soldier, carrying his gun over his right shoulder: hanging from the barrel are three Napoleonic soldiers with two more skewered on the bayonet. The Russian soldier is led by a small boy who carries a standard in the shape of an eagle. In the background are military tents. Underneath is an inscription in Russian, which has been translated as ‘Bringing home a bunch of spillikins for the pleasure of the children’, and an English inscription: ‘A RUSSIAN BOOR returning from his FIELD SPORTS’. Enamels have been used to colour the prints: the Napoleonic soldiers have blue coats, red waistcoats, yellow breeches and black hats with red feathers. The Russian soldiers have red hats and belts, ochre coats and blue breeches. The Cosack and small boy are clad all in red. The ground painted with bands of green, light brown and dark brown. The rim of the jug and the edges of the handle are painted green.

The scenes on the jug are derived from a series of coloured prints engraved by Ivan Ivanovic Terebenev (1780-1815) and published in Russia in November 1812. They celebrate the failure of Napoleon’s attempted invasion of Russia in 1812. On 14th September, Napoleon’s forces began an occupation Moscow but, running out of supplies, they were forced to attempt a retreat to Smolensk on 19th October. The retreat failed and 500,000 Napoleonic soldiers lost their lives. News of the defeat of the French reached England in mid-December, prompting celebration and widespread enthusiasm for all things Russian. The two Terebenev prints on this jug were redrawn by the English caricaturist George Cruikshank and published in London by Hannah Humphrey on 8th January 1813; Cruikshank copied the original Russian inscriptions but also added English titles and captions. A vast flood of commemorative pottery was also produced. This jug belongs to the ‘EUROPE PRESERVED’ series, which consisted of jugs of various sizes that reproduced Cruikshank’s prints in combination with various other pro-Russian prints and with the titles of ‘EUROPE PRESERVED, September 14th 1812’ and ‘HOURRAH Your SERENE HIGHNESS’. The ‘Serene Highness’ referred to was Mikhail Kutozov, Prince of Smolensk, who, as the Field-Marshal in charge of the Russian army, oversaw the defeat of Napoleon. 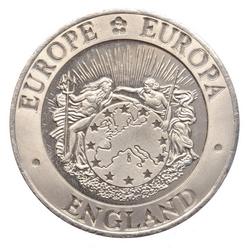 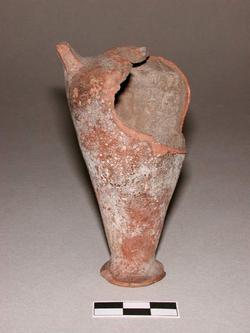 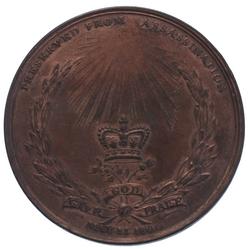 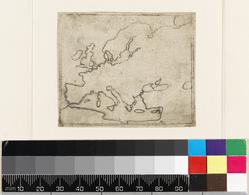