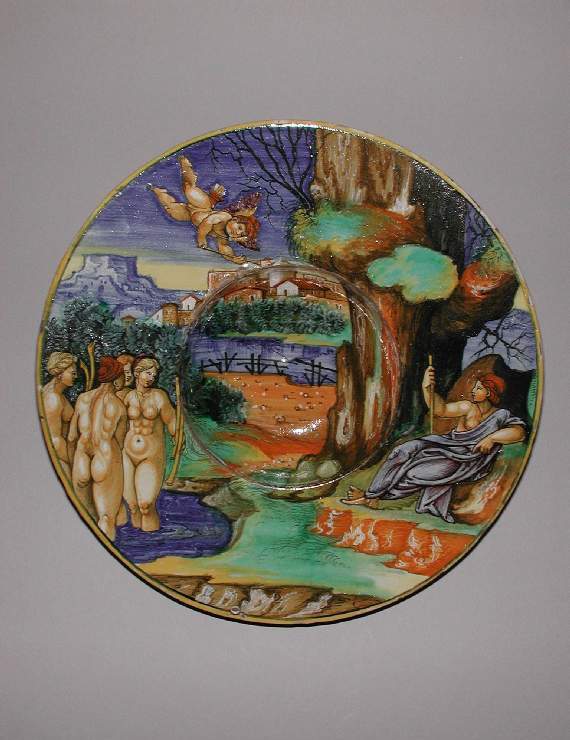 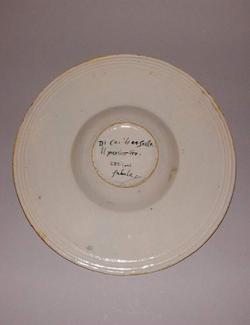 Pale buff earthenware, tin-glazed overall; the reverse pale beige. Painted in blue, green, yellow, orange, brown, manganese-purple, black, and white.
Shape 57, the underside of the rim moulded with three shallow concentric grooves. Circular with a broad, almost flat rim and small, deep well.
Scylla, Cupid and four Nymphs bathing. On the right, Scylla reclines on a bank beside a massive rock formation. She holds a wand in her right hand. On the left, four nymphs holding long horns stand in a pool. Above, Cupid, holding a flaming torch, flies towards Scylla. In the foreground there is grass; in the background, landscape with a town and mountains. The outer edge is yellow. The back is inscribed in the middle in dark blue: `Di C . 'de et Scilla/Il parlameto./fabula y' (Of Cupid and Scilla The conversation [?]. fable y).

Although unsigned, this dish can be attributed to Xanto on the basis of style, the literary and printed sources used, and handwriting

The figures were derived from two printed sources. Scylla was copied from the Muse Euterpe in the engraving of Parnassus by Marcantonio Raimondi after Raphael, the ultimate source for which was the antique marble Ariadne in the Vatican, The Cupid is either a reversed and upside-down version of the lower of two putti on the right of the same print or the middle putto of three on the other side. The four nymphs were drawn from Muses on the left of the Contest between the Muses and the Pierides engraved by G.G. Caraglio after Rosso Fiorentino. 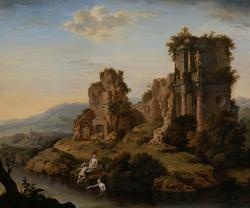 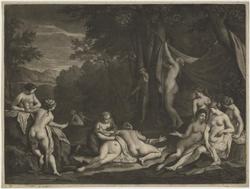 Diana and her nymphs bathing in a woodland stream 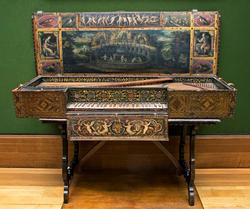 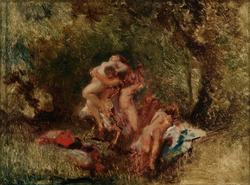