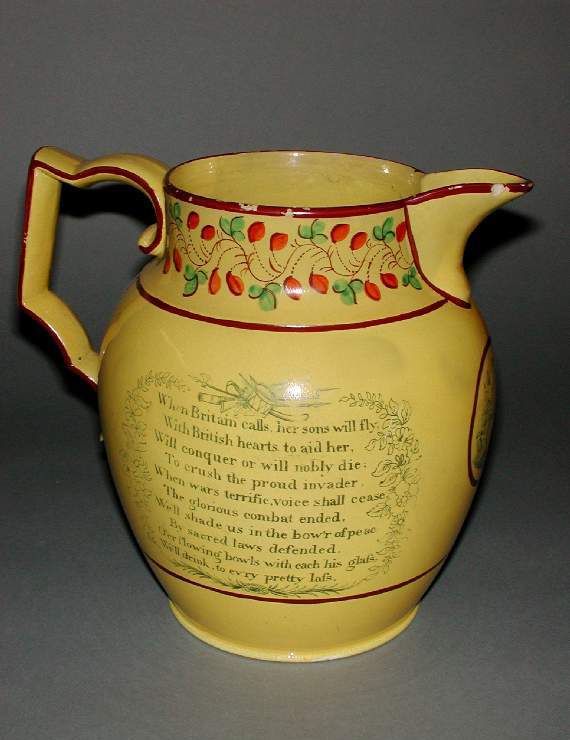 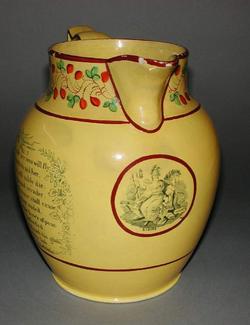 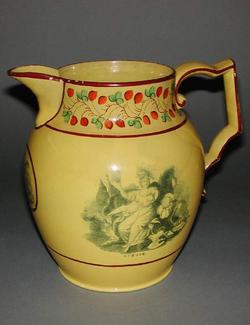 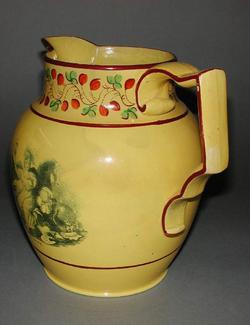 Yellow-glazed earthenware, bat-printed in black with allegorical figure of Europe and verse and painted in enamels.

Earthenware, lead-glazed yellow, bat-printed onglaze in black, and painted in red, green, and dark reddish-brown enamels. Ovoid body with projecting footring, cylindrical neck with projecting lip, and angular handle with a straight back, an inward scroll at the top, and two concave curves and a slight kick at the bottom. On one side it is printed with a vignette of an allegorical female figure seated holding up a lantern, seated in front of a horse, titled EUROPE below. This is repeated smaller and surrounded by a reddish brown circle on the front. On the other side is a wreath of flowers and foliage with a military trophy at top centre, and a shield flanked by palm branches at bottom centre. Inside it is a verse: 'When Britain calls, her sons will fly,/With British hearts to aid her,/Will conquer or will nobly die:/To crush the proud invader,/When wars terrific, voice shall cease/The glorious combat ended,/We'll shade us in the bow'r of peac[e]/By sacred laws defended,/O'er flowing bowls with each his glass,/We'll drink, to ev'ry pretty lass.' Below, and round the shoulder, there is a horizontal reddish-brown enamel band. Both sides of the neck are painted with a wavy spray of red berries and green trefoil leaves. The lip is outlined in reddish-brown enamel, and there is a thicker line round the rim. There are reddish-brown lines down the sides of the handle and across the top angle.

The verse printed on the jug appears to have been based on a traditional English song. In ‘The Universal Songster or Museum of Mirth’, a collection of traditional English songs published in 1826, the lines on the jug appear in a ballad entitled ‘My Country, Love, and Liberty!’. The ‘Universal Songster’ was illustrated by George Cruickshank, a noted caricaturist, demonstrating the close links that existed between traditional songs and the popular prints of the day, both serving as sources of entertainment and humour. The verses selected for the jug sets a patriotic and celebratory tone, emphasising drinking and merry-making. The final two lines on the jug do not appear in the song as printed in Cruickshank’s book but it is possible there were several different versions of the ballad or that the song was adapted for the jug.

Transfer printing was introduced to English pottery in the second half of the 18th century. Most early transfer-printed ware used the glue bat method. In this method, the design was engraved on a copper plate, which was then covered with linseed oil. The thin bat of animal glue was pressed onto the oiled plate and then applied to the ware. Once the bat was removed, the ware was dusted with powdered metallic oxide, which adhered to the oil, and fired to fix the design. This method was common for round-bodied vessels like this mug because the flexible glue bat can easily stretch round curving body.