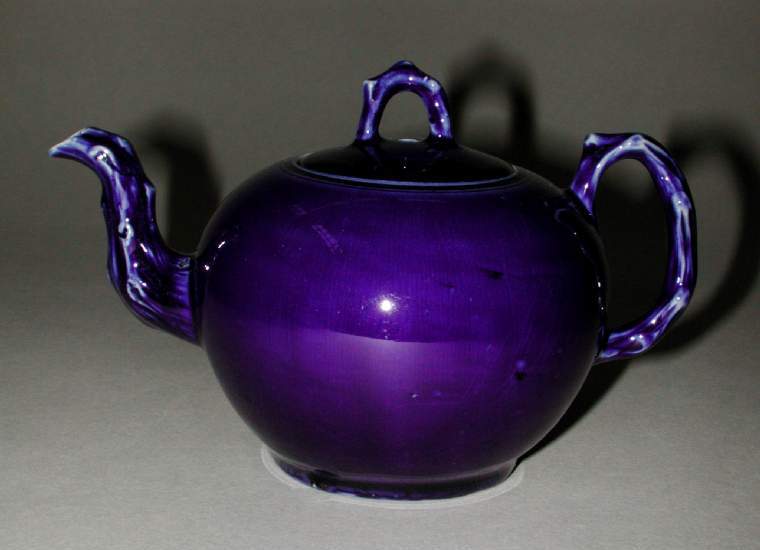 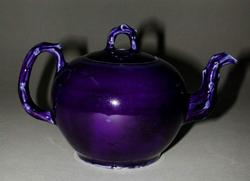 White stoneware, the body thrown, with moulded handle, spout and cover, coated overall with blue dip, and salt-glazed. Globular body with crabstock handle and spout, and slightly convex circular cover with a crabstock handle, arching over the ventilation hole. The interior was left white but has some streaks and speckles of blue.

Given by Mrs W. D. Dickson

This teapot is belongs to a group of white salt-glazed stoneware which is known as 'Littler-Wedgwood blue'. They are coated entirely or partly with a bright blue colour resembling a glaze, but probably a fusible dip or slip containing cobalt applied before salt-glazing. The term derives from an account written by William Pitt, in his 'A Topographical History of Staffordshire', (Newcastle-under-Lyme), 1817, and repeated by Simeon Shaw in his ‘History of the Staffordshire Potteries’, (Hanley), 1829, who stated that William Littler and his brother-in-law, Aaron Wedgwood, 'first introduced a compound of very fusible materials - of certain proportions of ground zaffre with the flint and the clay that composed the body of the pottery; mixed with a determined quantity of water, and varied for the different kind of articles. Into this liquid the vessels dipped, while in the state of clay very little dried, and absorbing the water, received a very thin coating of the materials in solution, which when dried and fired in the salt-glaze oven, appeared of a fine glossy surface . . .' Both men were salt-glaze potters in the late 1740s, but from 1751 Littler moved to Longton Hall to make porcelain. Several documents of the 1750s refer to the sale of blue ware. See Mountford, 1971, and Edwards and Hampson, 2005. It is possible that this teapot could have been made at Aaron Wedgwood's factory.