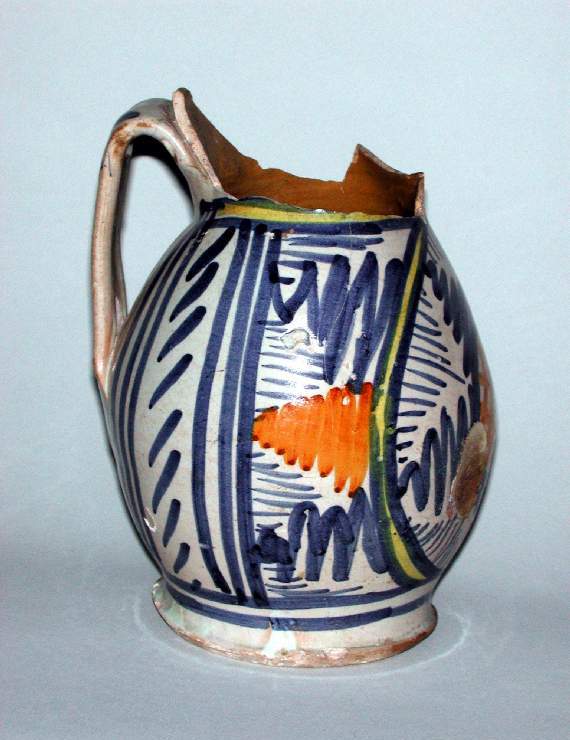 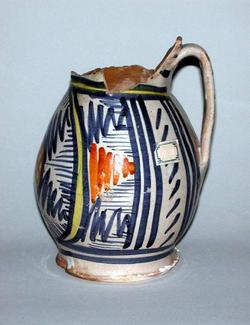 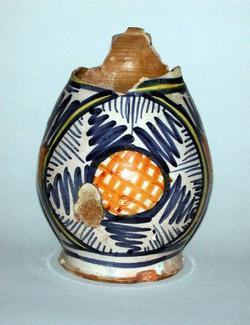 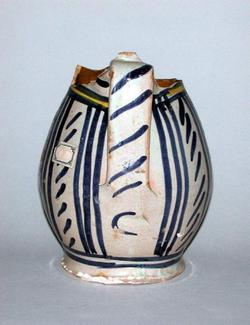 Cream earthenware, thrown. The interior is lead-glazed pale yellowish-brown; the exterior is tin-glazed; the base is unglazed. The front has a large fault where the vessel has adhered to another during firing. Painted in blue, yellow, and orange.
The front is decorated with a sunburst comprising a chequered centre, five blue rays enclosed by a yellow circle between two blue, and on each side, an orange ray between two blue. The handle is flanked by slanting strokes between two sets of three vertical lines. Round the neck is a yellow horizontal band between two blue; round the base, two blue bands; and, down the back of the handle, five slanting strokes with a `C' below.

History note: This jug came to the Fitzwilliam in a crate of sherds of Orvieto and other Italian maiolica accompanied by a label inscribed 'Mostly bought at Orvieto, some pieces,/marked P at back) from Perugia. The Orvieto pieces, with a few exceptions,/were found in excavating the foundations for houses near the Cathedral./ Presented by R.C. Bosanquet M.A./ 1904/ Also a squat jug (Caffaggiolo ware?) with blue and orange decoration: another/jug with escutcheon: & a fruit dish/(Urbino ware?: P all three from the same find.' This was the only jug decorated in blue and orange in the crate, so it is presumably the one mentioned, but it is unclear from this whether the three pieces were all from the 'same find' as the fragments in Orvieto, or from another location. However, as the jug with an 'escutcheon' bears arms which appear in a fresco in the Duomo at Orvieto, it seems likely that the find was in Orvieto.

Given by Professor R.C. Bosanquet

The attribution of this jug tentatively to Caffaggiolo on the label which accompanied R.C. Bosanquet's donation is unlikely given its purported find site near the Cathedral in Orvieto. It is more likely to have been made in Orvieto, or possibly in Deruta which exported maiolica to Orvieto. See the notes below.