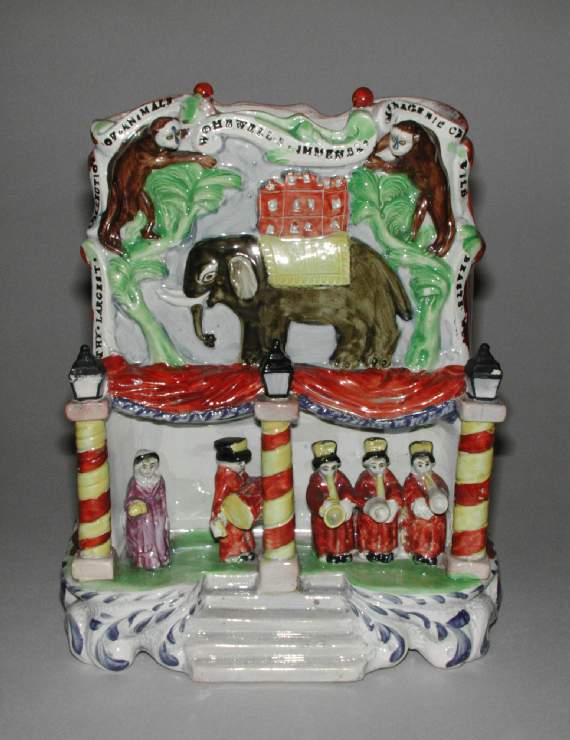 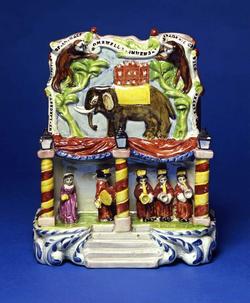 Staffordshire figure group representing Wombwell’s Menagerie on the front of a wide spill vase, standing on a blue and white scrolled base. Steps lead up to a stage on which three men are blowing trumpets, one beats a drum and a woman is seated. The stage is framed by yellow and red candy striped columns, with another in the centre, each topped by a lamp, between which red curtains are gathered up. Above is a moulded panel with an elephant, bearing a castle on its back, between two trees; on each tree is a monkey in high relief. Round the panel, on a ribbon, runs the inscription THE . LARGEST . COLLECTION. OF. ANIMALS .WOMBELL’S. IMMENSE. MENAGERIE. OF. WILD. BEATS. ETC. The back is flat, glazed and unpainted. The underside is flat and glazed, with two pad feet at the back corners ; the scrolls form feet at the front.

History note: Captain Reynolds Collection, London; sold to Messrs Gill and Reigate; Mr Stoner, London, from whom purchased in 1910 by Dr J.W.L. Glaisher, FRS, Trinity College, Cambridge. Dr Glaisher paid £125 for this and fourteen other pieces, as part of a purchase of 35 figures and figure groups.

Earthenware figure groups were popular from around 1810, although the earliest examples date from nearly a century earlier. A cheaper alternative to porcelain figures, they were often produced by small potteries; very few are marked. Classical or literary subjects were frequently copied from porcelain examples, but potters increasingly turned to scenes from everyday life and topical events. Early figure groups are often complex, including modelled and moulded parts, applied decoration and partially decorated backs. As demand increased, processes were streamlined to allow mass production and by c.1835 earlier methods had largely given way to three-part press-moulding. The flat back, relatively simple moulding and fewer modelled parts here suggest an early 1830s date.

Travelling menageries were popular in England from the late 18th Century. Exotic animals, such as lions and elephants had previously only been seen in aristocratic collections; now menageries took them out to the general public. From c.1830s, with the addition of animal tamers’ tricks, brass bands and human performers, the shows evolved into what we now know as circus. Stephani Polito bought the Exeter Change Menagerie, already established in London, c.1810. He died in 1814, but Polito’s Menagerie continued until c.1836. George Wombwell started his first menagerie c.1807 and by 1839 Wombwell’s Menagerie included 15 wagons of animals; by 1850 there were three shows touring; the business continued until 1884. There is a stuffed lion from Wombwell’s Menagerie in Saffron Walden Museum.

Moulding : Earthenware, moulded and modelled, lead-glazed and painted with enamels. 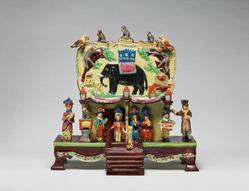 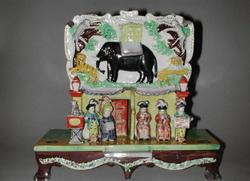 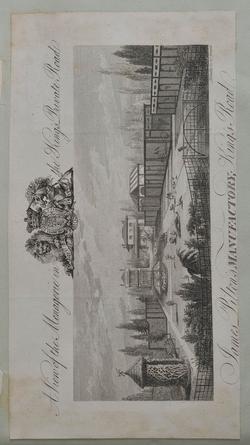 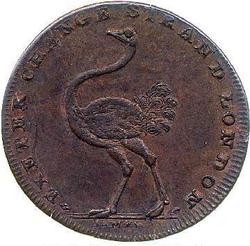