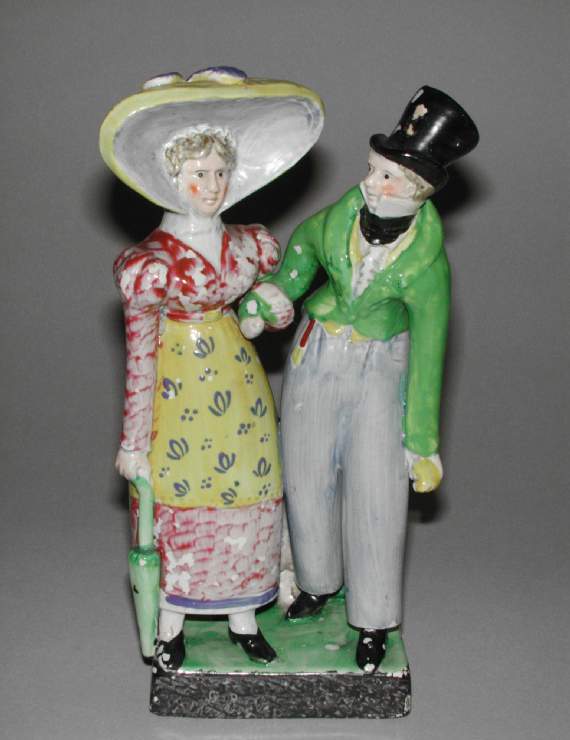 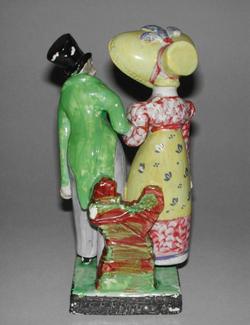 Earthenware group of a dandy and his lady walking arm in arm, the lady wearing a poke bonnet and the man a top hat, his head turned to look at her face. The lady is using a furled green parasol as a walking stick, she wears a yellow poke bonnet. a wavy pink dress with sleeves puffed up at the shoulders and a yellow apron. Her bonnet is very large and has a pink band with three blue feathers at the front. The gentleman wears a top hat and a frilled shirt with stock and high collar. He has a green coat, over a yellow waistcoat, and pale blue trousers. He carries yellow gloves in his left hand. They stand on a rectangular base, which has marbled black sides and a green top. At the back is a flattened tree stump. The underside of the base is recessed and glazed.

Earthenware figure groups were popular from around 1810, although the earliest examples date from nearly a century before. A cheaper alternative to porcelain figures, they were generally produced by small potteries and very few are marked. Classical or literary subjects might be copied from porcelain examples, but scenes from everyday life and topical events were also increasingly popular. These early figure groups are often complex, with modelled and moulded parts and applied decoration; the backs, though flat, are decorated. As demand increased, processes were streamlined to allow cheaper mass production and by the mid 1830s the earlier methods had largely given way to three-part press-moulding.

Some features of the modelling suggest this group might have been made by John Walton of Burslem, as mooted by Bernard Rackham in 1935. However, designs were frequently copied between potteries and this un-marked piece lacks the bocage often found on Walton’s figures.

This fashionably dressed man is a ‘dandy’ – a gentleman who regards his appearance as important. The group perhaps represents courtship. As Dr Glaisher's notes say, such groups are particularly interesting because they show contemporary costume. 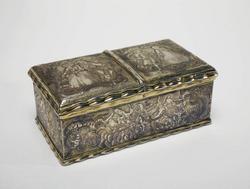 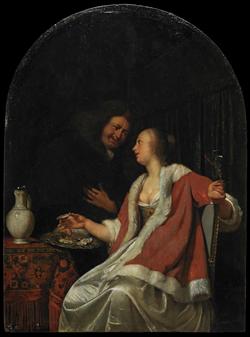 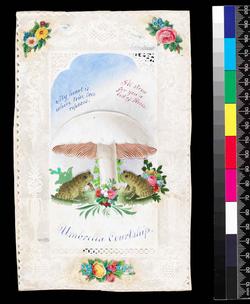