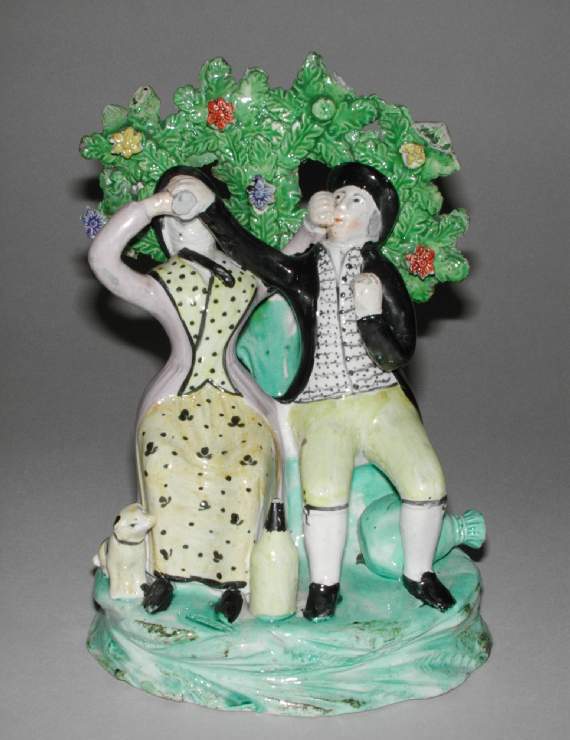 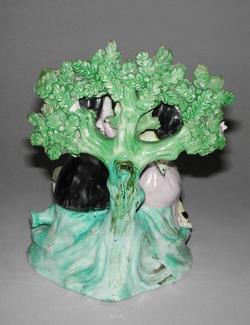 Earthenware group of a woman and man seated on a bench, with a tree behind. She is raising a drinking vessel to her mouth with her right hand and pushing the man’s face away with her left, while his right arm is raised to seize the vessel from her and his left curled up to beat her with a stick (now lost). At their feet a dog, a bottle and a bundle. She wears a pink dress over a brown-spotted yellow underdress, with a brown-spotted yellow scarf and a black hat. He wears a black jacket, yellow breeches and a black and white patterned waistcoat. They sit on a bench or grassy mound, coloured the same pale green as the elliptical base which also sweeps up at the back to form the trunk of the tree. The leaves of the tress are grass-green and decorated with small flowers in primary colours.The underside is flat, within a deep rim which forms the sides of the base. The back is flattened, but shaped and painted. The underside is open and the interior glazed.

Bocage figure groups, which feature stylised leafy trees, were made from around 1810-20. They are often associated with John Walton of Burslem, who is listed in local directories from c.1818-1835, and the fine modelling and style of bocage here suggest he could be the maker. However, several other potters made figure groups in this style, often copying designs and other features.

Earthenware figure groups were popular from around 1810, although the earliest examples date from nearly a century before. They were produced by many small potteries and very few are marked. Classical or literary subjects might be copied from more expensive porcelain examples, but scenes from everyday life and topical events were also increasingly popular. Early figure groups are often complex, with modelled and moulded parts and applied decoration; the backs, though flat, are decorated. By c.1835, these earlier methods had largely given way to three-part press-moulding to enable faster and cheaper production for a growing market. 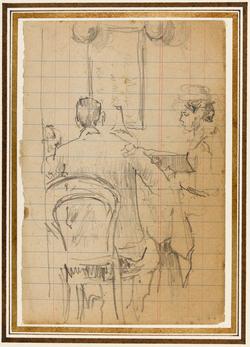 Couple at a restaurant table 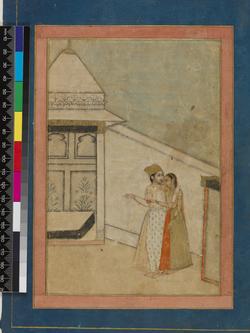 A newly married couple in a courtyard 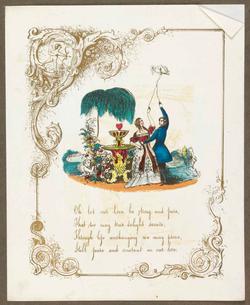 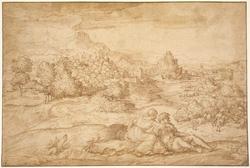 Mountainous landscape with a couple watching a hunt