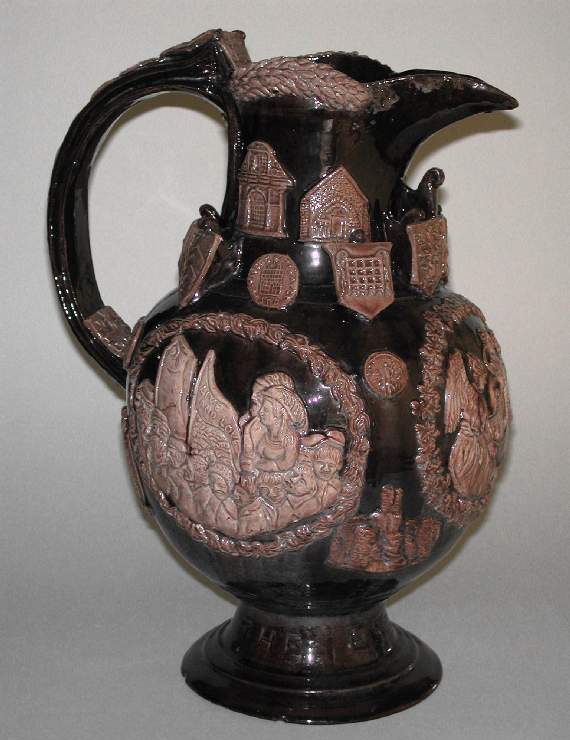 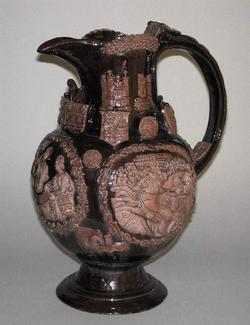 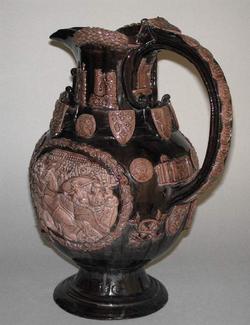 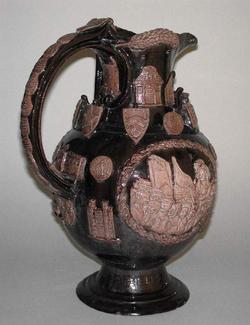 Globular body with tall, narrow neck, projecting lip and scroll loop handle, sitting on a circular, roughly conical, base. The jug is covered with applied reliefs: three large, narrative medallions to the sides, surrounded by wreaths of hops and saffron and with coins, castles and an ‘S’ emblem in between. The central medallion is inscribed ‘ESSEX’, the one on its left ‘LIVE AND LOVE’. Seven heraldic shields and two coins are mounted on projections around the shoulders; five castles and churches are applied around the neck. The handle is decorated with oysters and shields, and the neck rim with wheat. ‘THE ESSEX JUG’ is incised around the collar of the base. Each side of the handle is deeply incised. The underside is recessed and glazed.

'The Essex Jug' was made in different sizes, and various shades of brown; the decoration is not identical. Bingham used well-fired clay and plaster moulds for his relief designs, which were sometimes coloured. The central medallion shows ‘Essex’ displaying herself to ‘curiosity’ and ‘agriculture’. The side medallion to the right of this shows Boadicea’s victory over the Roman Legion, and the medallion on the left a procession linked to the Dunmow Flitch trials. This ancient tradition, mentioned in Chaucer’s ‘Wife of Bath’s Tale’, awards a flitch of bacon to married couples who can prove they have 'not wisht themselves unmarried again' for more than twelve months. Great Dunmow, home of the trials, is 17 miles from Castle Hedingham. The smaller reliefs represent well known Essex buildings, the arms of various towns and Essex families, and Roman coins.

Edward Bingham (1829- 1914) was the son of a Lambeth potter who mainly produced functional wares. The business moved first to Gestingthorpe, Essex, and then in 1837 to Castle Hedingham. From c.1864 Edward Bingham produced ornamental ware, drawing on mediaeval and Tudor styles and notable for its size and exuberant relief decoration, which often includes modeled animals, birds or faces. He used the local terracotta and, later, clay from Devon. Until the mid 1870s, most Hedingham ware was unglazed, and Bingham supplemented income through various other work, variously as a shoe-maker, teacher, sub-postmaster and ironmonger. The pottery was most successful between c.1875-85, with up to 13 kilns operating, but afterwards trade flagged and in 1901 the business was sold, though it continued to operate as ‘The Essex Art Pottery’ until 1905. Bingham continued to make pots there, and then for a few months in a temporary workshop, before emigrating to join his family in North America in 1906.

This jug was made for Dr Glaisher, who also bought several other pieces including another jug like it from the potter himself, c.1896. He later bought a modeled crocodile figure (Fitzwilliam collection, C.98-1928) and some twenty other pieces on two visits to the closed pottery, and one to a London showroom, in July 1907. He notes the best of Bingham’s work as ‘ambitious and characteristic work as regards the design modelling’ and ‘really fine and would do justice to any potter’, although he also records several examples of glazing failures. 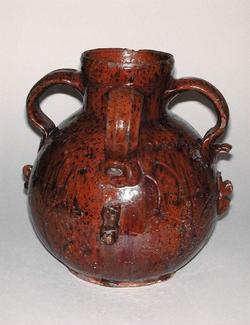 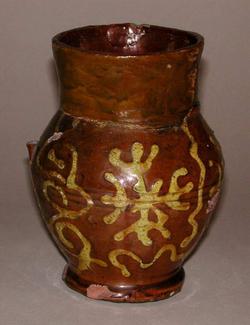 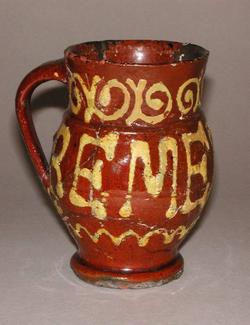 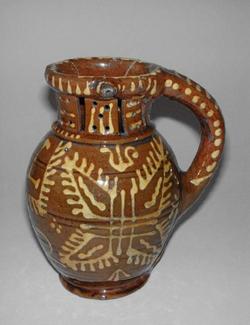