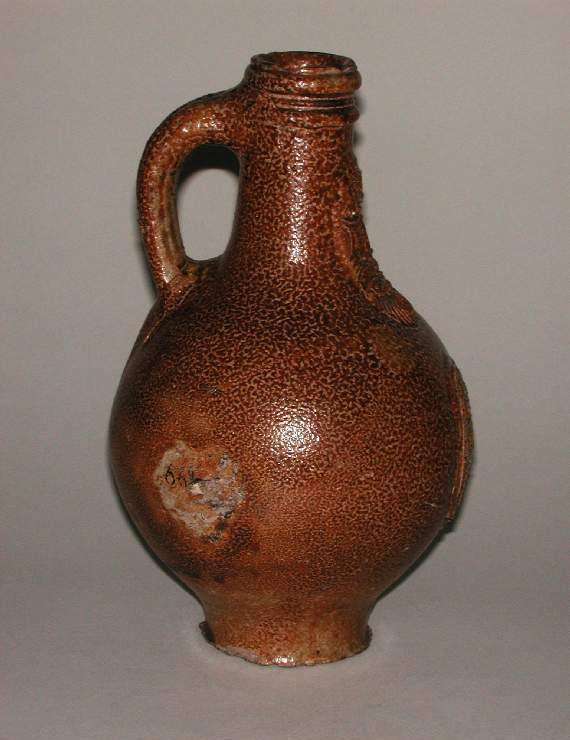 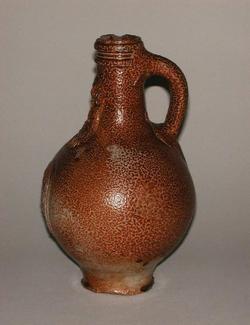 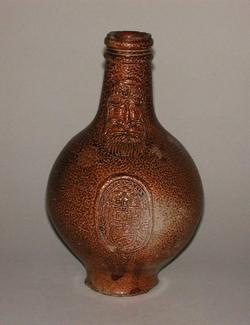 Brown salt-glazed stoneware with an applied bearded face mask on the neck and below an applied oval medallion containing a flower, a rectangle and a cartoucbe

Grey stoneware with applied moulded mask, iron-brown wash and salt-glaze. The bottle has a bulbous body contracting into a narrow cylindrical neck with cordons at the top, and a small loop handle with two vertical grooves. A crude bearded face mask is applied on the front of the neck, and below is an oval medallion enclosing a formal flower, a rectangle containing triangles and spots, and an oval cartouche. There is a large scar on one side.

The German term for salt-glazed stoneware jugs with a bearded mask on the neck is Bartmannkrug (bearded man jug). Workshops in Cologne, and Frechen, made them in vast quantities during the six¬teenth and seven¬teenth centuries. They were made in different sizes for domestic or commer¬cial purposes, and were expor¬ted widely. Dutch merchants shipped them to England, where they became known as `grey beards', or `Bellar¬mines' reputedly after Cardinal Roberto Bellarmino (1542-1621) whose reforming zeal made him unpopular in Prot¬estant states. The term was first mentioned in William Cartwright’s comedy 'The Ordinary, (1634).Some of the jugs are decorated with a medallion enclosing the coat-of-arms of a town, duchy, or family, or a merchant's mark.