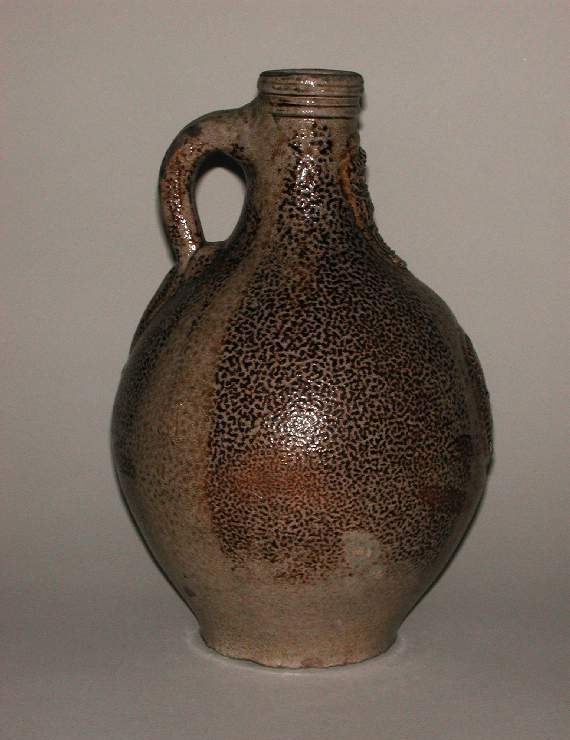 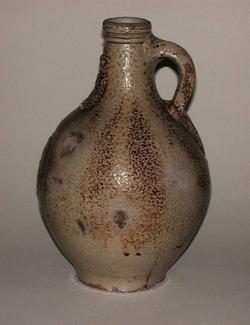 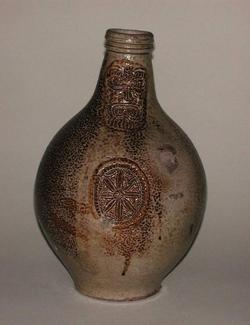 Grey stoneware, thrown, with applied handle, moulded relief decoration, and uneven iron-brown wash, under coarse mottled salt-glaze. The jug has an elongated bulbous body contracting at the top into a short narrow neck with cordons round the mouth, and a small strap handle. On the front of the neck is a crude bearded face mask in relief, and below it an oval medallion with a raised edge containing an eight-petalled flower with spots between the petals. The brown wash is much darker and more thickly applied on one side than the other, which has a wide vertical streak of mottling on a paler surface.

The German term for salt-glazed stoneware jugs with bearded masks below the rim is Bart¬mann or Bartmannkrug (bearded man jug). They were produced in vast quantities at Frechen during the second half of the six¬teenth and seven¬teenth centuries, in a range of different sizes for domestic or commer¬cial purposes. They were exported to England by Dutch merchants through ports in the Netherlands, and were widely distributed and used until the late 17th century when the manufacture of salt-glazed stoneware and glass bottles was developed here. The German stoneware jugs became known as `Bellar¬mines' reputedly after Cardinal Roberto Bellarmino (1542-1621) whose reforming zeal made him unpopular in Protestant states. The term was first mentioned in William Cartwright’s comedy 'The Ordinary', (1634), and by the 19th century this had become a common collectors' term for these bottles.