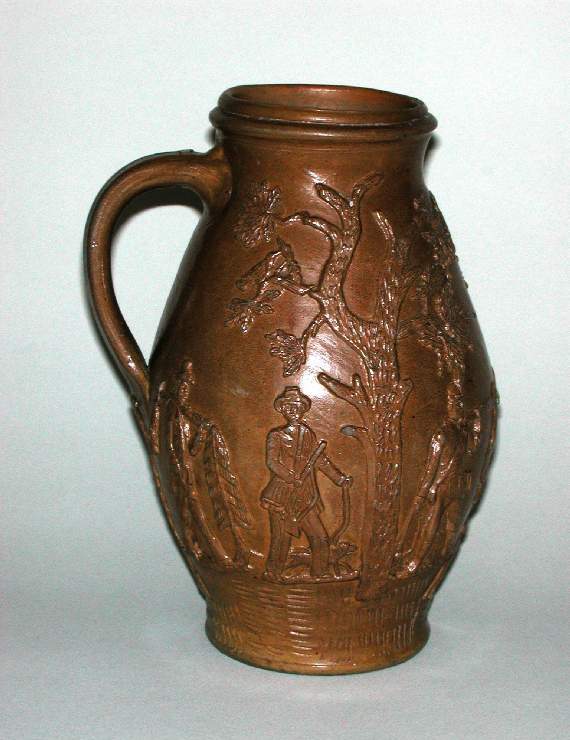 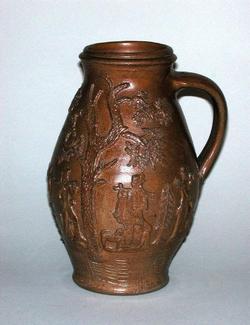 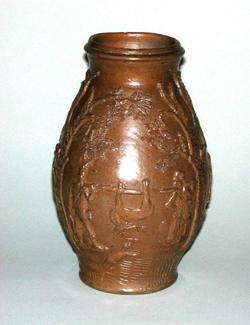 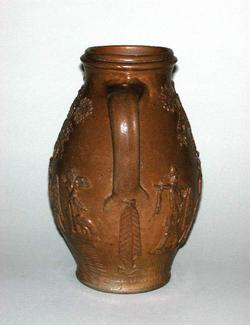 Pale brown stoneware, thrown, with an applied handle, incised and applied moulded relief decoration, and salt-glaze on the exterior. The ovoid jug has a very short neck with a recessed rim, and a broad strap handle which tapers towards its lower end, and has a hole at the top for the attachment of a mount and cover. The sides are decorated with a scene of huntsmen returning from the chase. From left to right: man holding a rabbit or hare over his shoulder on a pole; a small fir tree; a man holding a gun walking beside his hound; a large deciduous tree; two huntsmen carrying a dead stag upside down on a pole between them, and a hound jumping up towards it; another large deciduous tree; a huntsman holding an animal over his shoulder on a pole, with his dog walking behind him; a small fir tree; and a huntsman carrying a gun and blowing a horn . Below the figures there are groups of short vertical and horizontal lines representing the ground.

History note: Said by the vendor, Mr Entzmann to have been bought at a Jagdschloss in the Egerland; purchased from a stall near the Egerlander Café at Marienbad, belonging to Reinhold Entzmann and Son, Seidenerstate/Seilerstäte 21 Vienna, on 28 August 1910 for 30 Kroner (£1.5s.0d.)

The place of manufacture is uncertain.