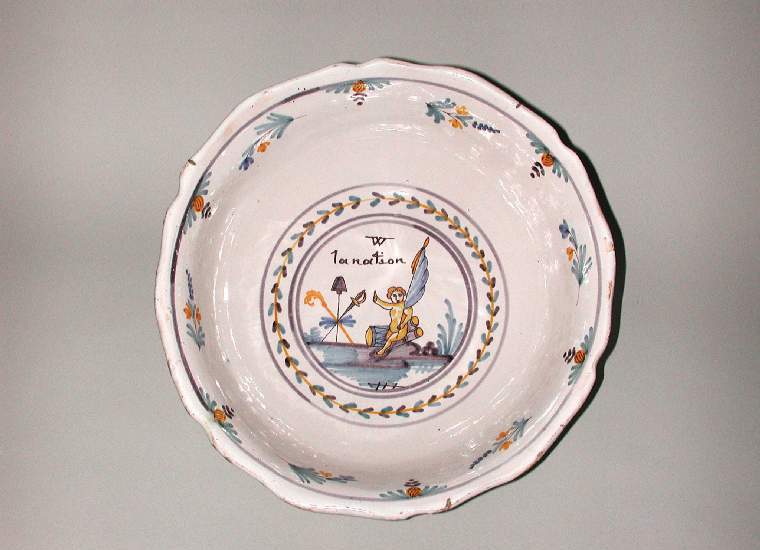 Tin-glazed earthenware painted in blue, yellow and grey. The bowl is circular with a wavy edge and curved sides, spirally fluted on the outside. It is decorated in the middle with a circular medallion with a border of stylized leaves enclosing a little boy holding a flag, seated on two guns with a drum beside him. On the viewer's left of him there is a trophy comprising a spade, a crozier and a sword, with above the words 'VV /la nation (Long live the Nation). Round the upper part of the sides there are twelve sprays of foliage and a line which encircles the bowl below the rim. There is a blue P on the reverse.

Faïenciers responded to the French Revolution by producing pottery - particular dishes, plates, and bowls - decorated with patriotic slogans and symbols, known today as faïences patriotiques. Nevers, an important manufacturing centre of faïence since the late sixteenth century, was a major producer. The military character of the central medallion on this bowl, inscribed 'Vive la nation', indicates that it was made after the commencement of the Revolutionary War. The trophy to the left of the boy represents the three estates, clergy, nobility and workers. The slogan had begun to be used instead of 'Vive le roi' (Long live the King) and other cries incorporating le roi, from about 1790-2. 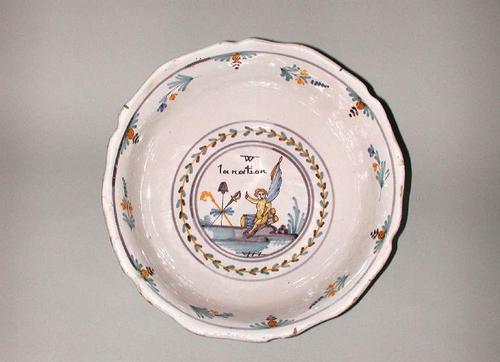