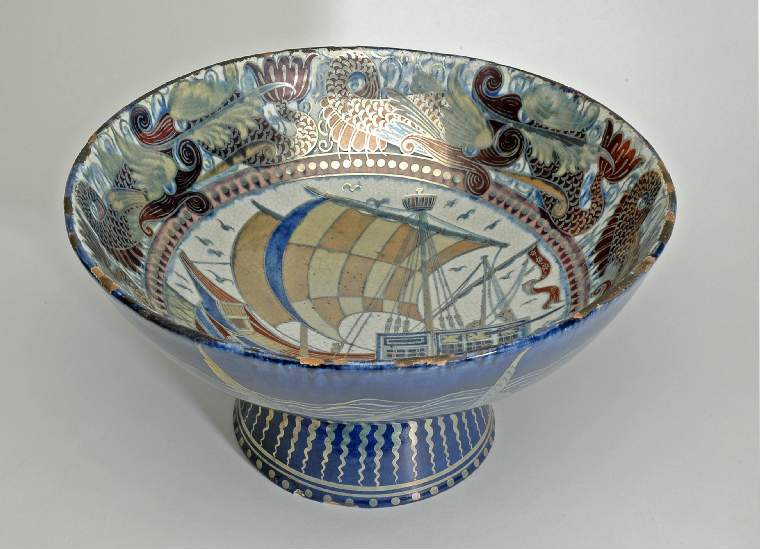 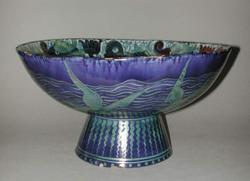 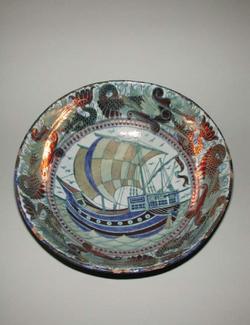 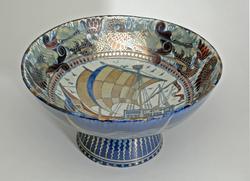 The inside of the bowl is decorated with large medallion, containing a galleon in full sail, surrounded by a band of blue, red and gold dolphins and scroll work. A band of dots, on a pink ground and highlighted to give a 3-D effect, separates the two. The design, all set on a cream slip ground and highlighted in lustre, covers the whole inner surface. The galleon has a blue, gold and bronze striped hull with portholes, two square buff and pink check sails and gold rigging; it sails on stylised waves, with birds in the sky. The exterior is covered in deep blue under-glaze and decorated with six silver and gold birds flying over gold ripples. On the foot, silver-gold spikes ripple down to two thin gold bands and a row of gold dots. The deeply recessed underside is unglazed.

Method of acquisition: Given (1942) by Howarth, Walter, Dr

William Frend De Morgan (1839-1917), now widely regarded as the most important ceramicist of the Arts & Crafts movement, also worked in stained glass and became a successful novelist. The son of a non-conformist mathematics professor, he became a close friend of William Morris and Edward Burne-Jones and married the Pre-Raphaelite painter Evelyn Pickering (1855-1919), in 1887. As a ceramicist, De Morgan was primarily a designer/decorator and chemist, working on bought-in blanks or pots thrown to his design. He experimented widely with techniques and glazes, re-discovering methods for making and applying lustres and the colours of Iznik pottery and using them for a range of complex fantasy designs featuring ships, birds, flora and animals. This bowl offers a fine example of such experimentation, complete with the flaws of work in progress: several differently coloured metallic lustres have been used, giving iridescent effects that vary as the bowl is moved around, but some colours have run and there are patches of cracked glaze. The design suggests the bowl may date from 1882-88, when De Morgan set up his factory at Merton Abbey (next door to Morris’s factory), as tiles and plates from that period feature ships and fish with similar features. The designs for the ship and for the dolphin border are in the Victoria & Albert Museum collection. 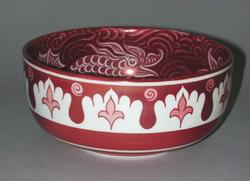 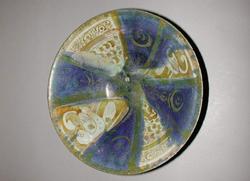 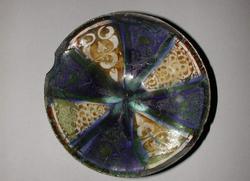 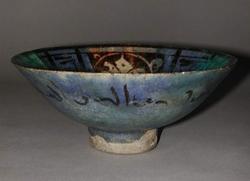