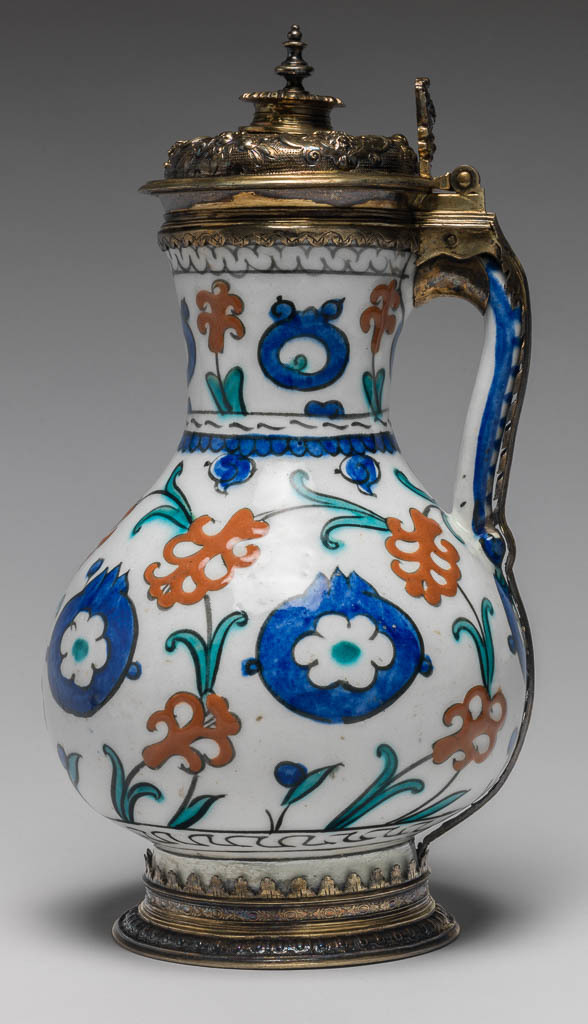 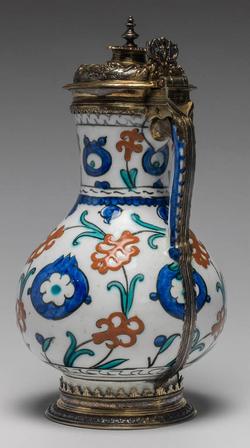 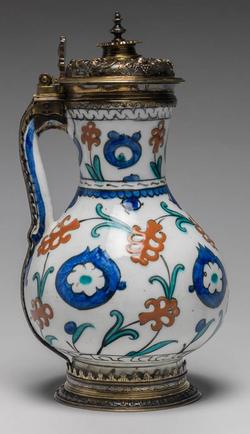 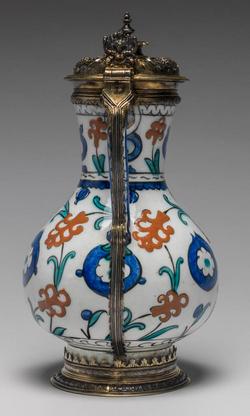 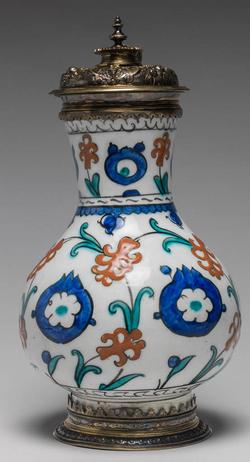 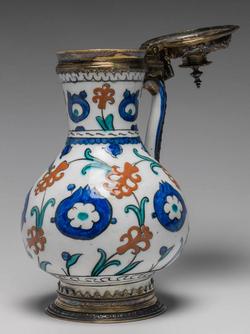 Fritware, wheel thrown, painted red slip, blue green and black under a colourless, slightly pitted glaze
Shape: pear shaped body with a cylindrical slightly flaring neck, sits on a low foot ring. A strap handle is attached just below the rim and on the shoulder, covered on the exterior with a sliver gilt mount. Circular silver gilt mount on the base, a circular hinged lid on the rim is mounted with a finial and with a thumb rest; a strip is mounted on the handle running down to the base.
Exterior: three linear friezes on below the rim, on the shoulder and on the lower body comprise respectively black scalloped lines, black dashed lines with underlying blue lappets and roughly drawn black crenulations. These friezes enclose a pattern of blue pomegranates and scrolling red hyacinths that dominate the neck and body. Glaze covers the surface including the underside of the foot ring. The mounts are cast and engraved, with lappets on the base, reeded with a serrated edge on the handle, with lions’ masks and fruit on the lid and with a winged figure on the thumb rest.
Interior: Glazed but otherwise undecorated.

Purchased with the Leverton Harris Fund, and from the bequest of Albert Leopold Reckitt

John (Jan) Hoffman was an immigrant goldsmith from Bamberg, who was denizised in 1577. He was a member of the Dutch Church in London. He was last recorded in 1599 and his date of death is unknown.

Label text from the exhibition ‘Feast and Fast: The Art of Food in Europe, 1500–1800’, on display at The Fitzwilliam Museum from 26 November 2019 until 31 August 2020: Together with the hyacinth, the pomegranate became a common decorative motif on later sixteenth-century polychrome tableware made in Ottoman Anatolia, as seen in this Iznik jug. It was likely made and exported to Elizabethan London shortly before 1592, when the fashionable silver-gilt mounts were added to protect its fragile edges and render it even more luxurious.

colourless, slightly pitted, covers the surface including the underside of the foot ring Glaze
Fritware