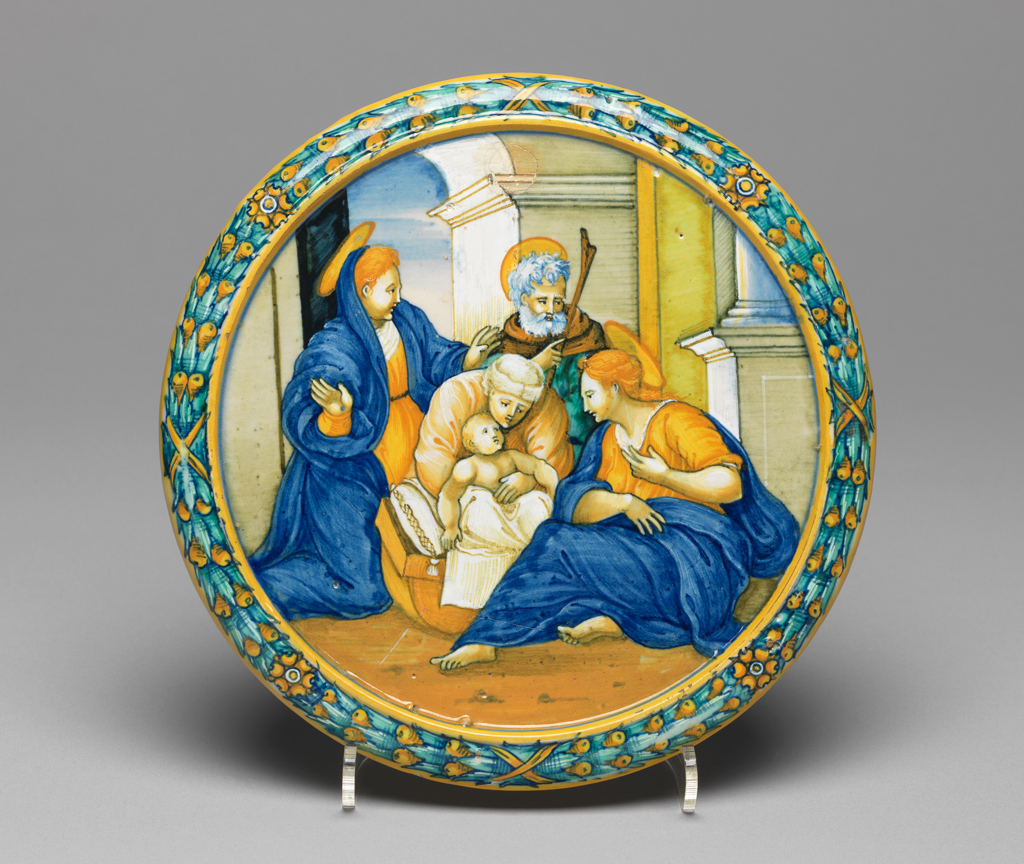 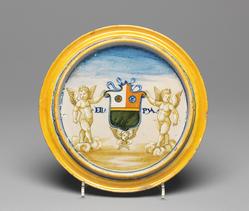 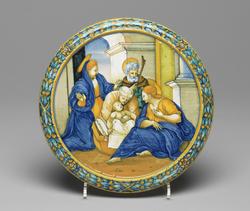 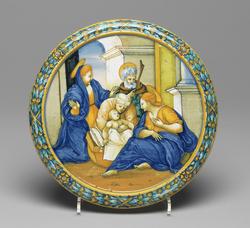 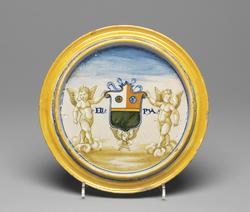 Maiolica cover from an accouchement set bowl, painted in polychrome with the Holy Family.

Pale buff earthenware, tin-glazed overall. Painted in blue, turquoise-green, yellow, orange, black, grey, and white. Circular with a flange on the underside; the upper surface flat with a convex rim.
The Holy Family in an architectural setting; on the rim, bound leaves and berries between concentric yellow bands. On the back, two putti standing on clouds support a shield bearing the arms sable, a fess or, a chief party per pale gules and argent two rosettes counterchanged flanked by the letters `ELI' and `PYA'; below, a winged putto's head. The background is blue above the arms and brown below. The flange and rim are yellow.

Label text from the exhibition ‘Feast and Fast: The Art of Food in Europe, 1500–1800’, on display at The Fitzwilliam Museum from 26 November 2019 until 31 August 2020: Cover depicting The Holy Family from a (lost) accouchement set\nfrom a (lost) accouchement set Recovery from childbirth – the most dangerous experience in most women’s lives – required nourishing food, like sweetmeats or broths. In Italy, these were traditionally served from a maiolica set given to the new mother during her post-natal confinement period, often by her husband. It usually comprised 5 stacked pieces: a standing bowl and cover (that doubled as a plate), a footed drinking bowl, and a salt and its cover. The Nativity scene beautifully painted onto the upper side of this cover (tagliere) was meant to inspire the new mother, who would have looked to the Virgin and St Anne as models of motherhood. The reverse is painted with two putti, the family’s coat-of- arms, and the initials, ‘ELI’ and ‘PYA’, thought to be the name of the father, ‘Elisio Piani’, a government official in early sixteenth-century Urbino. Probably ‘Milan Marsyas Painter’, Le Marche, Italy, c.1531, after an engraving by Giovanni Giacomo Caraglio (c.1505–65) after Parmigianino (1503–40).

Label text from the exhibition ‘Madonnas and Miracles: The Holy Home in Renaissance Italy’, on display at The Fitzwilliam Museum from 7 March until 4 June 2017: This cover is the surviving part of a set of painted ceramic pieces traditionally given by a father to celebrate the safe delivery of his child. The nativity scene includes Mary, Joseph and a female saint; the central figure embracing the new-born Christ has no halo and may be a midwife. The scene is based on an engraving from a design by Parmigianino.

The Holy Family on the top of the cover was derived from the Adoration of the Shepherds, engraved by G.G. Caraglio after Parmigianino

Inscription present: I smaller than L and Y and A joined 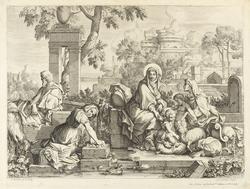 The Holy Family at the washing place 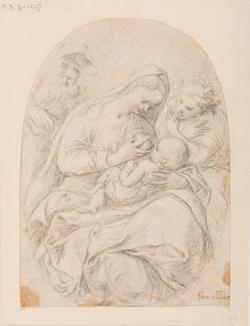 Holy family with an angel 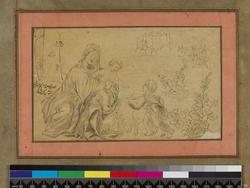 The Holy Family with the Infant St. John in a landscape 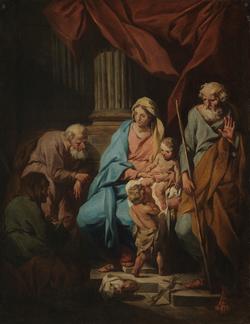