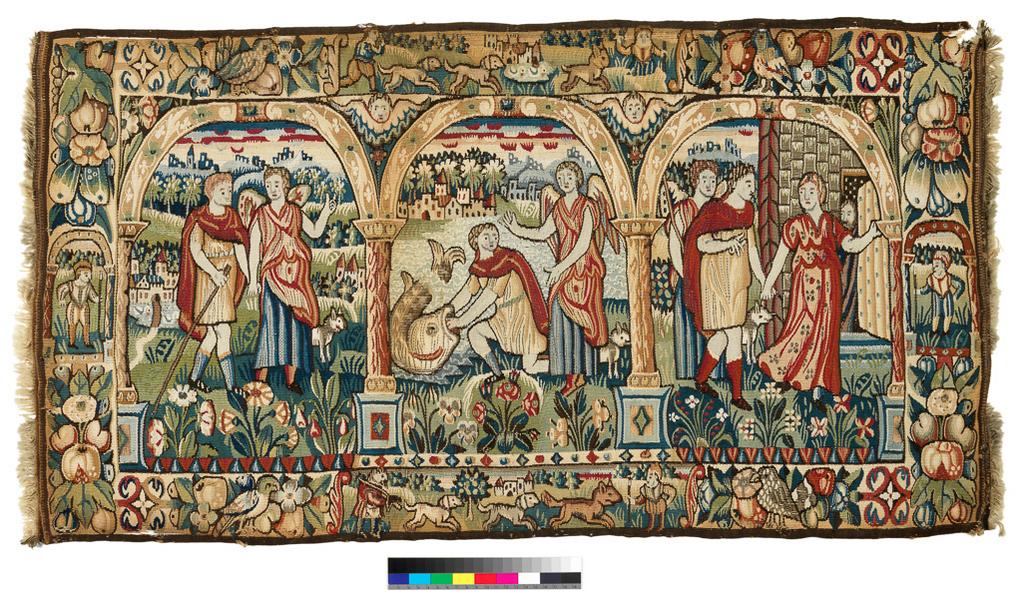 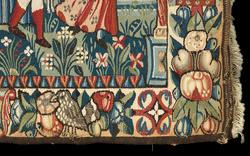 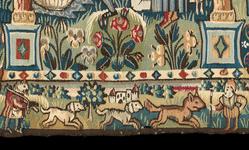 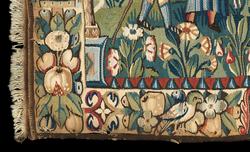 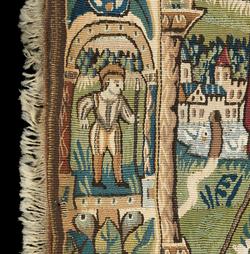 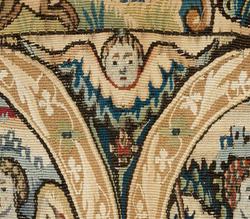 Cushion cover, woven tapestry in 'Sheldon' style, depicting three scenes from the biblical story of Tobias and the Angel.

This tapestry shows three scenes from the Old Testament story of Tobias and the Angel. Each is framed by an arch and separated by a cherub; different flowers decorate the corners.
The tapestry scenes do not follow the order of the Bible story. In the first, Tobias, son of Tobit and Anna, sets out on a journey with his dog and an angelic companion, Raphael. They were to collect a debt owed by Tobit’s cousin. On the way, shown in the second scene, the Angel makes Tobias catch a large fish and keep its guts for medicinal purposes.
The story, but not the tapestry, continues with the adventures of Tobias with his cousin’s family; he was made so welcome that a marriage was arranged with his cousin’s daughter. She had already been married seven times, and on each occasion a demon caused the groom to die on his wedding night. Tobias, however, burned part of the fish guts and conquered the demon.
Married, he now returns home, the last scene on the tapestry. Tobias is welcomed home by his mother. His father, still blind, sits inside. There would probably have been another square cushion showing the end of the story, depicting Tobias using the last bits of the fish to cure his father’s blindness.
The borders show fruit, flowers, birds and hunters. Diagonally opposite each other top and bottom are thrushes with speckled breasts perched amongst leaves. Towards the corners a clover-leaf motif leads the eye into the two different arrangements of fruit and flowers that decorate the side borders, separated by the figure of an armed man. Although the drawing is the same, their clothing is differently coloured.
The weaver showed different hunting scenes in the top and bottom borders. In the background of the upper border, ducks swim in the moat of a large house; in the lower border, huntsmen chase a fox.
Biblical references: Book of Tobit, scene 1 – 5:16; scene 2 – 6:2-4; scene 3 – 11:9

This is almost certainly a cushion cover and would have been part of a set of six, or even twelve, each portraying a different episode in the story. At least 22 differently coloured wools were used to weave this tapestry. Previously described as 'Sheldon' work, made in Barcheston, it is now thought that this cover was probably woven in London. 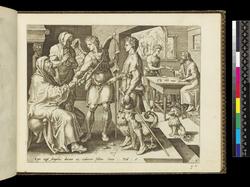 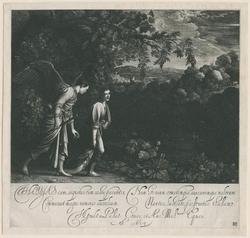 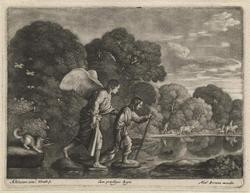 Tobias and the angel 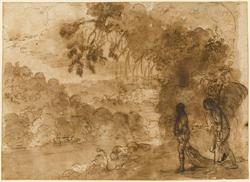 Landscape with Tobias and the Angel Interview with Angel, Creator of the Natural Hair Lounge, London