Orlando finds Ruggiero's Charger Frontino, his Armour and Sword on board an abandoned Ship: C.10-1953 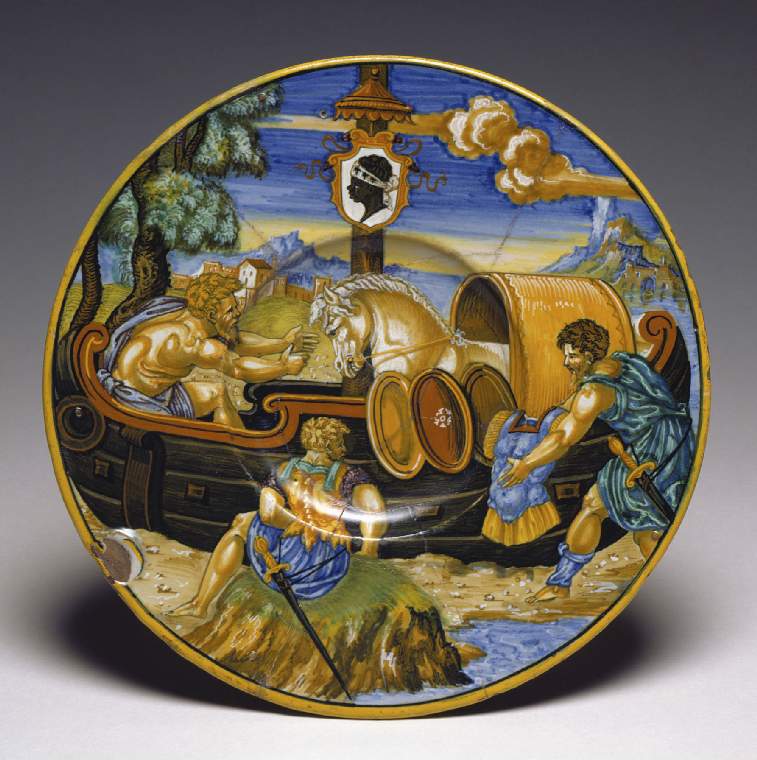 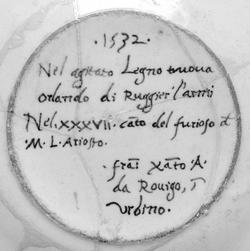 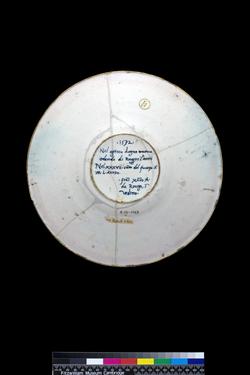 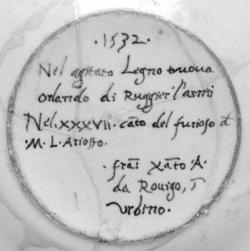 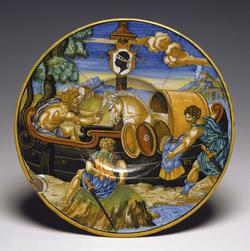 Orlando finds Ruggiero's Charger Frontino, his Armour and Sword on board an abandoned Ship

Maiolica plate, painted in polychrome with Orlando finds Ruggiero's Charger Frontino, his Armour and Sword on board an abandoned Ship.

Pale buff earthenware, tin-glazed overall; there is a fault in the glaze on the left of the front; the reverse is off-white. Painted in blue, green, turquoise-green, yellow, orange, stone, brown, manganese-purple, black, and white.
Shape 52. Circular with a wide, gently sloping rim and shallow well, slightly and unevenly convex in the middle.
Orlando finds Ruggiero's Charger Frontino, his Armour and Sword on board an abandoned Ship. Oliver stands on the right holding Ruggiero's armour. Brandimarte is aboard the ship, holding out his arms towards Frontino, who is partly hidden by three shields and an awning. Orlando, girt with the sword Balisarda, sits with his back to the viewer on a rock in the foreground. Hanging from the mast is a shield, charged with the Pucci arms argent, a moor's head proper wearing a headband argent charged with three hammers sable, with behind, a papal ombrellino. In the background to left there is a tree, and on the right, a rocky island. The edge is yellow. The back is inscribed in the middle in dark blue: `.1532./Nel agitato Legno truova/Orlando di Ruggier' l'armi/Nel.XXXVII. cato del furioso d/.M.L. Ariosto./fra: Xato .A./da Rouigoi /Urbino.' (In the tossing vessel Orlando finds Ruggiero's arms, In the 37th canto of the furioso of Messer Ludovico Ariosto. Francesco Xanto Avelli da Rovigo in Urbino.).

The dish was painted by Francesco Xanto Avelli, a native of Rovigo, near Padua, and was recorded in Urbino between 1530 and 1542. During that period he marked or signed numerous dishes and panels, many of which are also inscribed with their subject and its literary source. Xanto's reference on the back of this dish to canto 37 (stanzas 25-9) of Orlando Furioso, shows that he used the first edition, published in 1516 and reprinted in 1521, 1524, and each year until 1531. In the second edition of 1532 and subsequent editions, the action takes place in canto 41 (stanzas 25-9). These editions had no illustrations to serve as a basis for the illustration on the dish. So Xanto followed his usual practice of constructing a scene with figures taken from prints, in this case just one, the Abduction of Helen, engraved by Marcantonio Raimondi after Raphael. The first illustrated Orlando Furioso with a simple woodcut to each canto had been published in 1530, but it was not until 1542 that really lively illustrations appeared in the edition by Gabrielli Giolito de' Ferrari of Venice.

This is one of thirty-six dishes surviving from a service bearing the arms of a member of the Pucci family of Florence. Thirty-four are dated 1532 and two, 1533. The identity of the owner of the service is uncertain. Piero Maria Pucci of Florence (b. 1467) is one member of the family who has been suggested. Another was Roberto Pucci, whose wife having died in 1526, entered the Church, becoming Bishop of Pistoia in 1541, and a Cardinal in 1542, after which he impaled the Farnese arms with Pucci. He died aged eighty-three in 1547. Most of the dishes are decorated with scenes from classical mythology or history, but this dish and another in the British Museum differ in having scenes from one of the greatest romantic epic poems, Orlando Furioso by Ludovico Ariosto (1474-1533). The action shown on the Fitzwilliam's dish takes place after the hero, Ruggiero, had abandoned his ship in a storm off the coast of Egypt, leaving on board his horse, Frontino, his armour and his magic sword, Belisarda. These were found by a Christian warrior, Orlando, who took the sword for himself, and distributed the armour and horse to his companions, Oliviero, and Brandimarte, in preparation for a battle with a Saracen, Gradasso.

Tin-glazing : Pale buff earthenware, tin-glazed overall; there is a fault in the glaze on the left of the front; the reverse is off-white. Painted in blue, green, turquoise-green, yellow, orange, stone, brown, manganese-purple, black, and white.
Painting 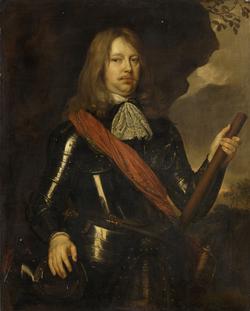 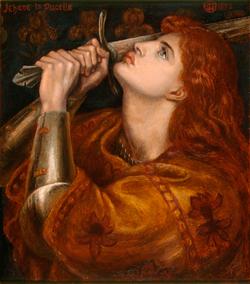 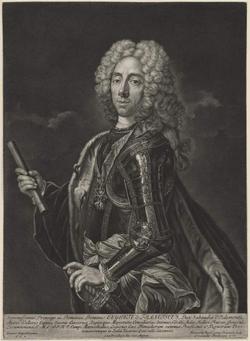 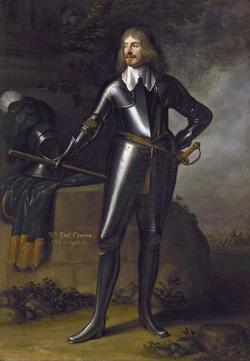