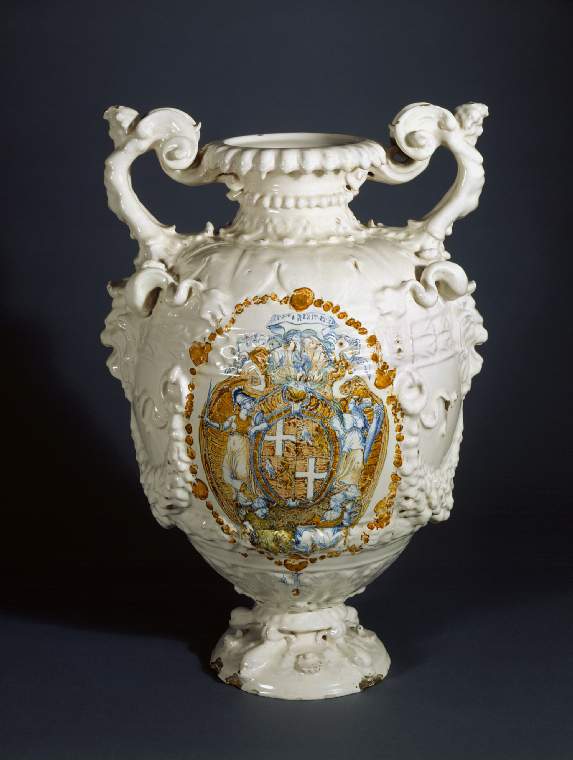 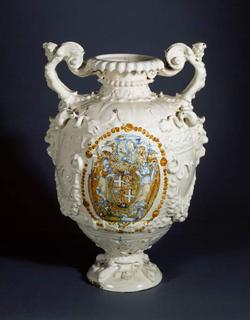 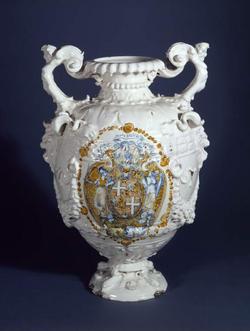 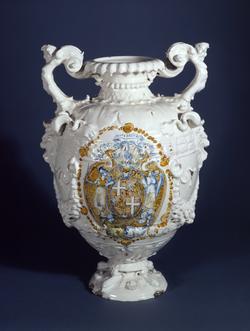 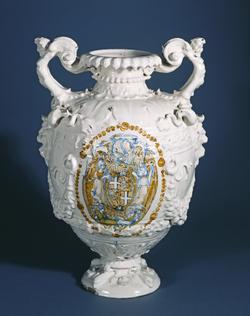 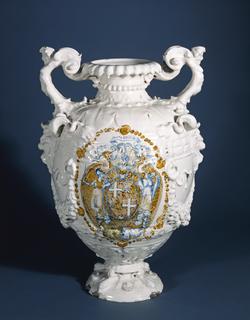 Earthenware, moulded and covered overall with thick tin-glaze, and painted in blue, green, yellow, and dark yellow.
The vase stands on a narrow, circular foot. Its body is ovoid and it has a short concave sided neck and everted rim. On opposing sides it has handles in the form of outward-facing, winged and bifurcated tritons, whose tails extend on either side. The foot is decorated with four applied shells alternating with four applied dolphins with heads towards the rim and tails looped up, so that the loop is attached to a flange round the short stem. The lower part of the body has a calyx of acanthus leaves. Above there is a plain horizontal band and a band of flowerheads, buds and stylised foliage in relief. Below the triton handles is a grotesque mask in relief, from the mouth of which depends a bunch of fruit and two swags, looped up by rings and ribbons to a horizontal band of laurel, all in relief. On the shoulders are four downward pointing leaves on each side. The neck is decorated with downward-pointing stylised foliage and a row of beading, and its everted rim is gadrooned. Painted on both sides of the vase, ignoring the relief ornament is an oval shield charged with the arms of Jean Pariso de la Vallette quartered with those of the Order of the Knights of St John 1 & 4, gules (shown dark yellow) a cross argent 3 & 4, gules (shown dark yellow) a ger falcon passant and a lion rampant or (shown dark yellow), supported on the dexter by a full length figure of Justice holding a sword and scales (?) and on the sinister by a full length figure of Fortitude holding a column; below on the left is a seated man wearing a turban and on the right a seated female warrior, all on a shield-shaped escutcheon with an undecipherable crest above (because it has run) and over that, a ribbon bearing the motto 'M(IL)ITEM.REXIT.ET CA.....' on one side, and on the other side, '...MILITEM.REXIT.ET.C....'. There are minor differences between the painting of the figures on the two sides. The whole is surrounded by a rosary with a pendant cross.

Given by the Friends of the Fitzwilliam to commemorate the Directorship of Simon Swynfen Jenkins, aided by grants from the National Art Collections Fund (now The Art Fund) and the Regional Fund administered by the Victoria and Albert Museum.

Method of acquisition: Given (1995) by The Friends of the Fitzwilliam Museum 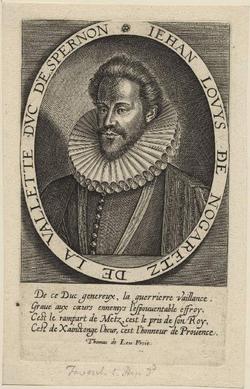 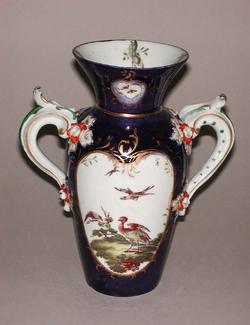 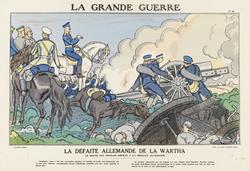 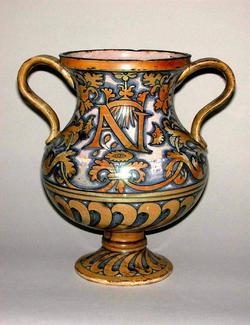