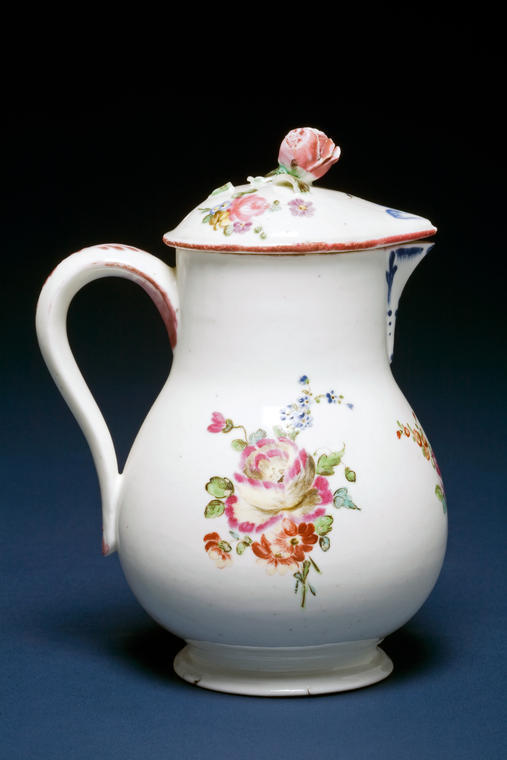 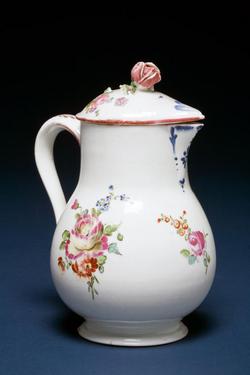 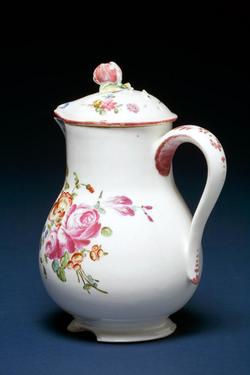 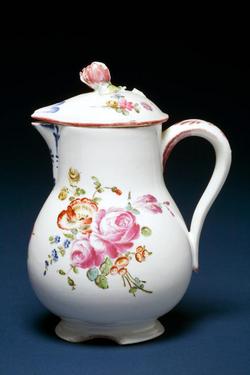 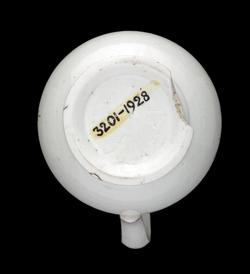 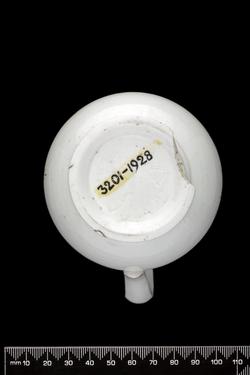 Soft-paste porcelain milk jug and cover, lead-glazed and painted in enamels with a bouquet and sprays of flowers and foliage.

Highly translucent soft-paste porcelain, lead-glazed, and painted in blue, two shades of green, yellow dark pink, red, and black enamels. Pear-shaped with a projecting lip, turned foot, and loop handle, the slightly domed cover with an applied rose bud knob and two leaves on a stalk. A hole is pierced near the edge on the handle side. The body is decorated on one side with a large bouquet of roses and other flowers, on the other with a smaller bouquet, and under the lip with a smaller spray of flowers. The lip is outlined in blue and has a stylized flowerhead in the the middle. The top and bottom of the handle have dull pink strokes and dots forming highly stylized foliage, and there is a pink line on the rim. The cover has a blue trefoil on the projection, a floral spray on each side of the rose knob, and a pink line on the edge.

History note: Max Rosenheim; sold Sotheby's, 4 May 1923, Catalogue of the collection of porcelain and pottery formed by the late Max Rosenheim Esq F.S.A. and Maurice Rosenheim Esq, F.S.A. (sold by order of the executors), lot 319; sold for £4.10s.0d. to Dr J.W.L. Glaisher

The Villeroy factory founded by Francois Barbin operated from about 1737 to shortly after November 1748 on land belonging to Louis-François Anne de Neufville (1695-1766), who became 4th Duc de Villeroy in 1734. In 1750 was re-established by Barbin and his son in the rue de Puits-Massé in Mennecy itself.

This covered jug was one of the factory's characteristic forms. The hole in the cover is probably for the attachment of a mount. 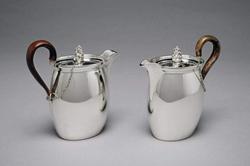 One of a pair of café au lait pots

One of a pair of café au lait pots 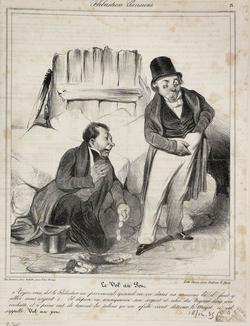 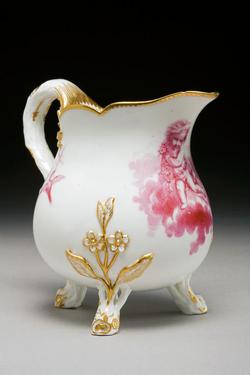