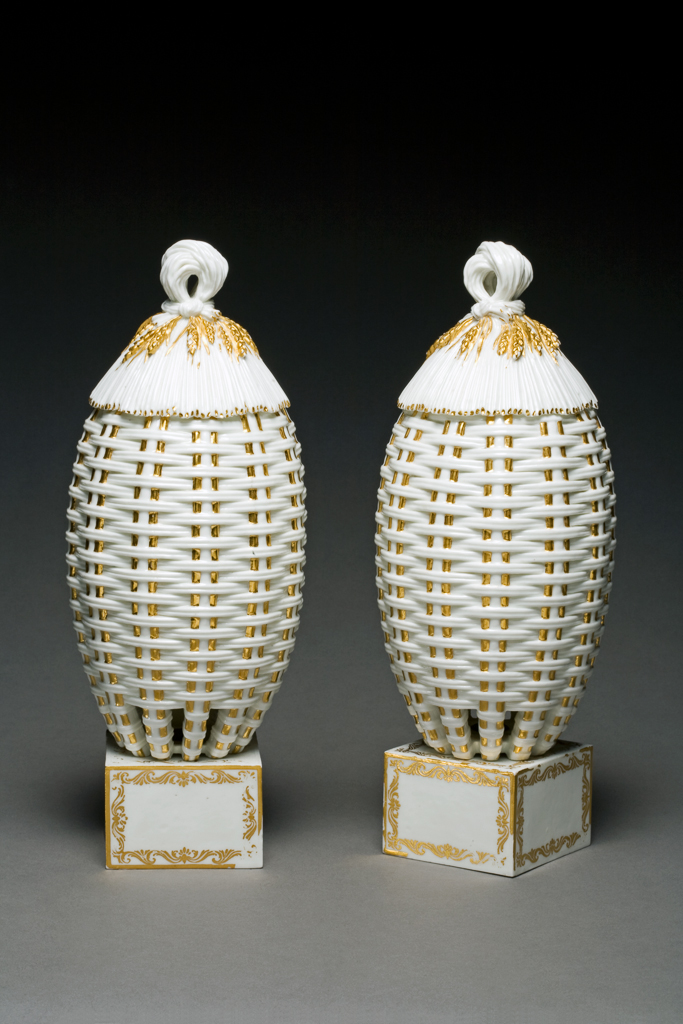 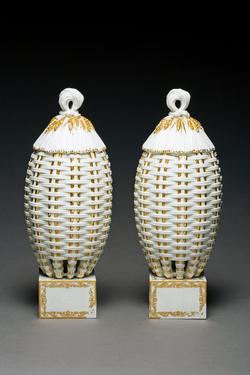 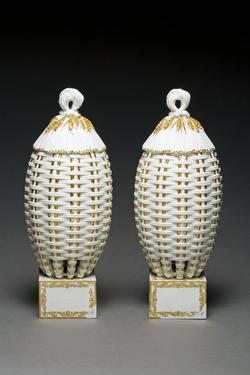 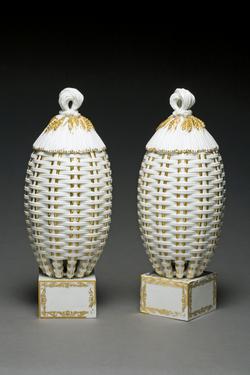 Soft-paste porcelain vase and cover, moulded, glazed, and gilded, with base of probably hard-paste porcelain, glazed, and gilded. The vase is in the shape of a slender beehive made of wickerwork, pierced at the base. The cover is moulded to resemble thatch and has a ring handle in the shape of a doubled over sheaf of corn, tied at the junction with the cover, so that ears of corn radiate from it. Two of each group of three vertical osiers on the vase, the corn stalks and the edges of the thatch on the cover are gilded. The vase stands on a separate square base, decorated with gold scrolls round the outer edges. One of a pair with C.3.2 & A-1955

Method of acquisition: Given (1955-05-26) by The Friends of the Fitzwilliam Museum

This rare model was the first of two beehive-shaped ornamental vases produced by Sèvres. The plaster model (without a base) was no. 25 in the 1814 inventory of work 1740-80, and was illustrated by Albert Troude as ‘vase ruche, no. 1’. On accession this vase and its pair (C.3.2 & A-1955) were attributed to Vincennes, but this is not supported by the only documentary records so far found for them by Tamara Préaud, the archivist at Sèvres, which were in 1769 and 1775. The inventory of stock taken on 1 January 1769 listed two vases and their bases in the biscuit ready for glazing, valued at 48 livres each. Four 'vase ruche' were recorded as having fired successfully in the 'Etat de défournement de Couverte du 1er Avril 1769', under moulded pieces (Bibl. d’Institut de France MS 5675, p. 44).This suggests that two were made between 1 January and 1 April. In December 1769 a pair were recorded in the sale's records as bought by the duc de Praslin for 240 livres each. (Vy 4 fol. 193), which might have been the Fitzwilliam's pair. Two vases russe in the white at 48 livres were listed in the inventory of 1 January 1774 and two were sold to a Madame Luillier on 7 August 1775 for 120 livres each (Vy5, 23). The bases on the Fitzwilliam were added at an unknown date. It was not uncommon to add bases of hard-paste Sèvres or other porcelain to soft-paste vases in the early 19th century, for example, a Vincennes vase Parseval of 1751-2 in the Belvedere Collection has an added Sèvres base of 1821. It is not known when the bases to this pair were added. 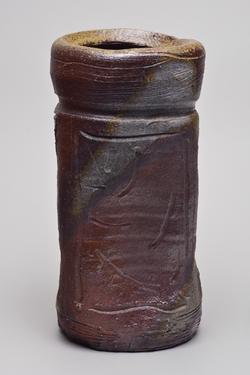 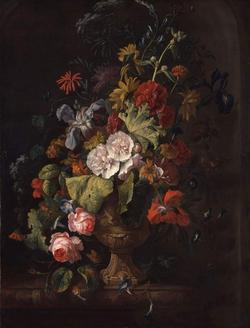 A vase of flowers