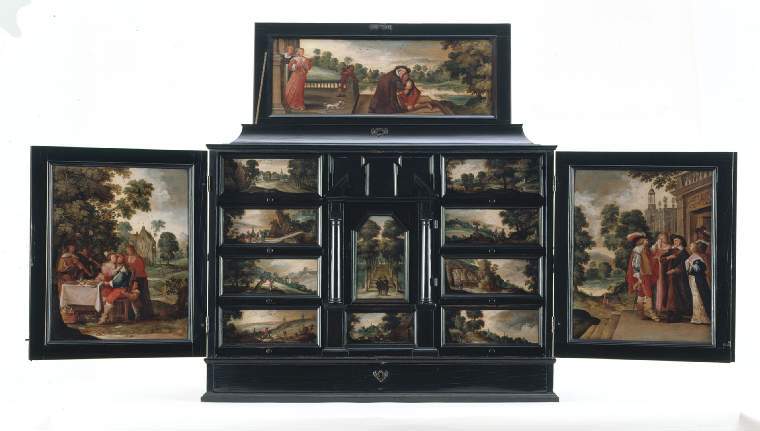 Cabinet, ebony, and oak, painted in oils with hinged lid, and two fielded panelled doors, enclosing nine drawers (A-I) and a central door decorated with scenes from the story of the Prodigal Son, and a draw below (J) The central door opens to reveal a pillared and mirrored miniature room with chequered floor. The cabinet is supported by a rectangular stand with turned twisted legs (K) and has a key (L).

Cabinet, veneered with ebony, and oak panels painted in oils. Rectangular with an iron ring on each end, a cavetto moulded superstructure with a hinged lid, an apron drawer at the bottom, two fielded panelled doors, enclosing nine drawers, and a central cupboard with doric columns on each side, and a broken pediment above, enclosing an ivory pillared and mirrored perspective (illusionistic room) with a chequered floor. The interior of the panelled doors, and the underside of the lid are painted with three large scenes from the story of the Prodigal Son: the departure (R door); feasting (L door) and the return (underside of lid). The drawer fronts, and the central doors are painted with smaller scenes from the story. On the right: the Prodigal sleeps under a tree; begs beside a wayside Cross; stands in rags outside a cave; and tends swine. Below the central door, he prays beside the swine. On the left from the bottom up, he (?) is shown riding; shooting; begging; and being driven away from an inn. On the centre door, a couple, probably his parents, stand with their back to the viewer looking down an avenue of trees towards a small figure of the Prodigal. The central door opens to reveal an illusionistic room with a chequered floor, and full-length figures of a man (right) and woman (left). only visible in the mirrors on the sides. The cabinet is supported by a rectangular ebonized wood stand with turned twisted legs (K), and has a key (L)

History note: The donors believe that the cabinet was purchased by their grandfather in Antwerp after the First World War.

Given by Louise Nichols, Birgit Carolin, and Hélène Mitchell in memory of their parents, Johannes Herman and Hélène Warning, and their grandparents, Robert and Hélène De Vos.

Mid 17th century
Production date: circa AD 1640 : The cabinet is of later manufacture

The fronts of the small compartments are painted with figures in landscapes, and the two doors and the underside of the lid in the top are painted with episodes from the Biblical parable, The Prodigal Son, possibly by Frans de Momper (1603-1660). The central door conceals a ‘perspective’ – an illusionistic compartment with a chequered floor, and mirrors – which was a feature of seventeenth-century Antwerp cabinets.