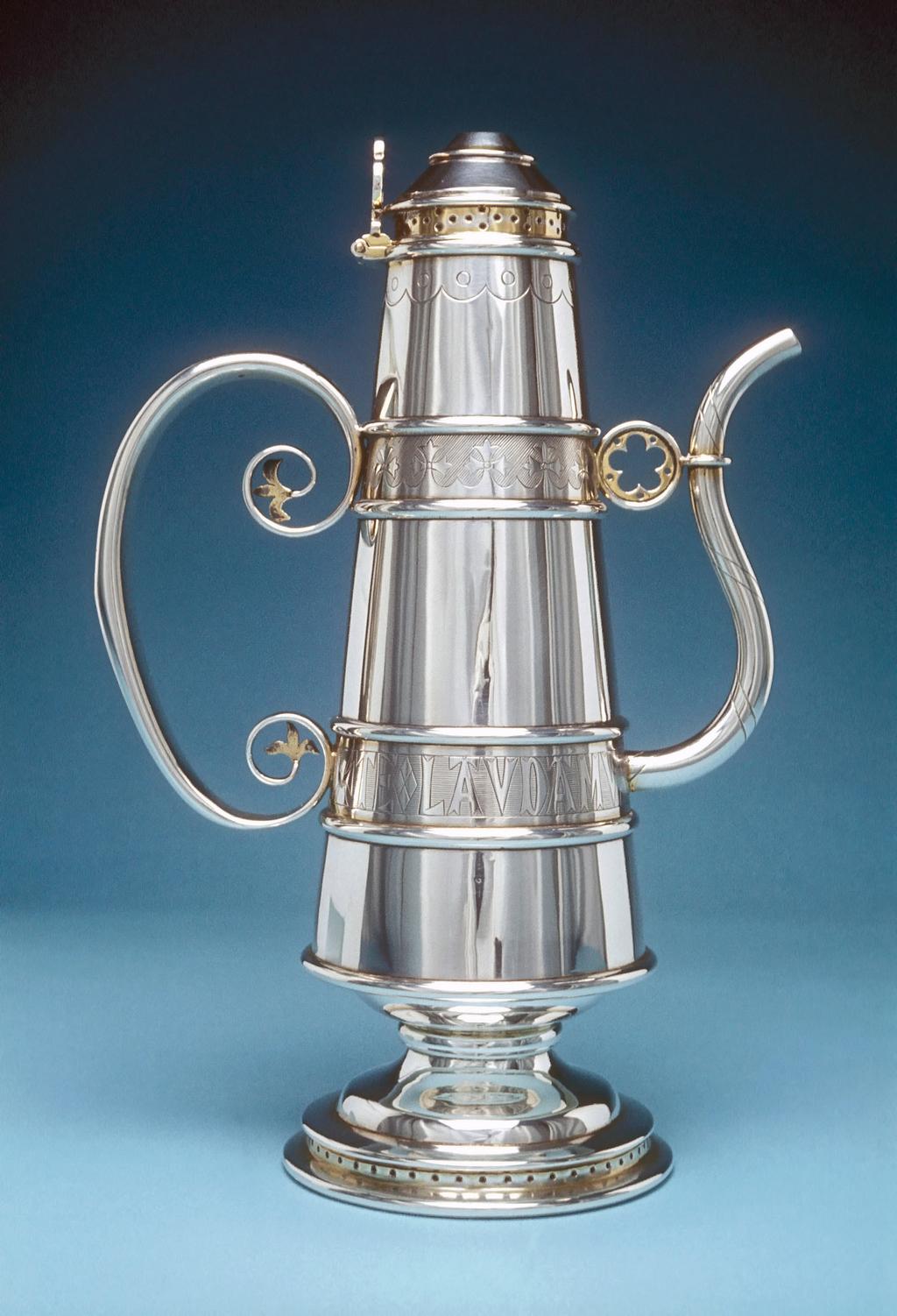 Silver with many traces of gilding and engraved decoration, including the inscription 'TE LAVDAMVA TIBI BENEDICIMVS', and on the underside of the foot 'To the Glory of God and in loving remembrance of Thomas Brber who fell asleep in Jesus on the + Feast of the Circumcision 1863. +'

Silver with many traces of gilding, and engraved decoration. The flagon stands on a stepped and slightly domed foot, the step of which is pierced with a series of holes. The tapering cylindrical body is annulated with roll moldings, one at the top and bottom, and two pairs at intervals between. The cover is attached to the body by means of a hinge with a trefoil-shaped thumbpiece pierced by four hearts; the lower part of the side of the cover is pierced with a series of groups of four holes. The S-shaped spout is engraved with a pair of spiralling lines, and is linked to the body by a cinquefoil within a circle. The curling ends of the flat, ear-shaped handle terminate in fleurs-de-lys. Below the moulding at the top of the body there is a border of engraved scallops and small circles. Between the upper pair of roll mouldings there is a running trefoil-ended cross pattern against a diagonally hatched ground. Between the lower pair is the inscription 'TE LAVDAMVS TIBI BENEDICIMVS' preceded by a Cross, and with a lozenge between TE and LAVDAMVS and between TIBI and BENEDICIMVS. On a disc inserted under the foot is the inscription 'To the Glory of God and in loving remembrance of Thomas Barber who fell asleep in Jesus on the + Feast of the Circumcision 1863. +'.

Method of acquisition: Given (1981-06-08) by The Friends of the Fitzwilliam Museum

The piece is marked on the lid. The base is probably marked as four impressions are visible on the interior, but the exterior of the base is covered by the disc bearing the commemorative inscription

Inscription present: the . is raised half-way between the letters