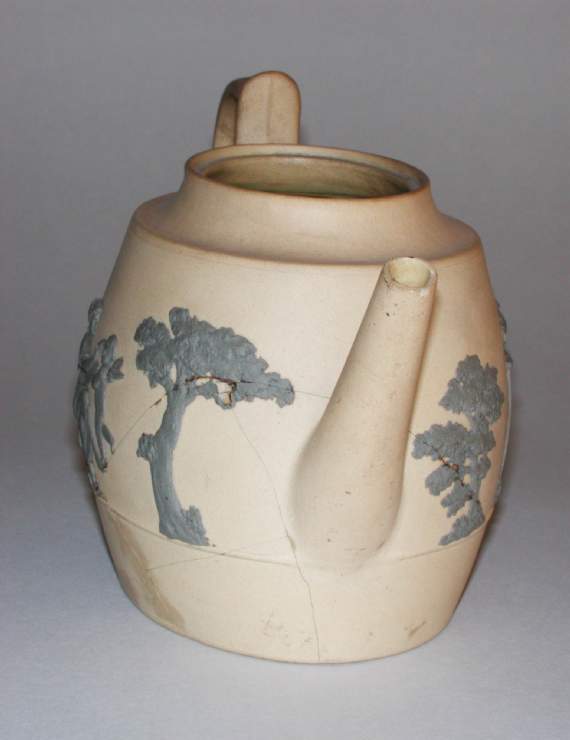 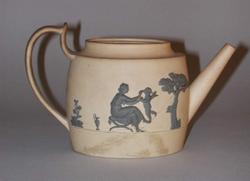 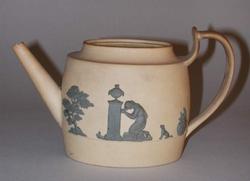 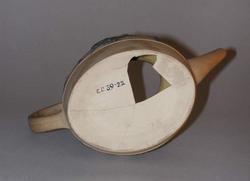 Caneware with applied dark grey moulded reliefs, the interior glazed. Oval with incurved shoulder with a flange rising upwards at one end to meet the strap handle. Straight upward sloping spout. On side is decorated with Charlotte kneeling at the tomb of Werther, with a tree on the left, and a dog and a two-handled pot of flowers on the right. The other side is decorated with Sportive Love (a seated woman playing with Cupid), with a plant and a ewer on the left and a tree on the right. Cover missing.

Given by Miss Erskine

Cane ware was a refinement of an earlier buff body. Experiments were in progress by the early 1770s, but even by 16 September1779 it was not satisfactory, when Wedgwood mentioned it in a letter to Bentley (E.26-18923), The first time it was mentioned in a Catalogue was in 1787, in which it was described as 'bamboo or cane-coloured bisqué porcelain'.

The designs for Sportive Love and Charlotte at the tomb of Werther were attributed to Lady Elizabeth Templetown (1747-1823) in the Wedgwood Catalogue of Cameos, Intaglios, medals, Bas-Reliefs, Busts, and Small Statues . . . . 6th edn, Etruria, 1787, class II, p. 39, nos. 271 and 272. They were probably modelled by William Hackwood. The exact date of the designs is not known, but Wedgwood wrote to her in June 1783 requesting more designs (Wedgwood MS E.26-18958). See Documentation, Reilly, Wedgwood, 1989

Inscription present: A square paper inside the pot inscribed in pencil after acquisition with a two-line description, 'Wedgwood, about 1779-1795'/Given by Miss Erskine/for the purpose of study/May 1939.'