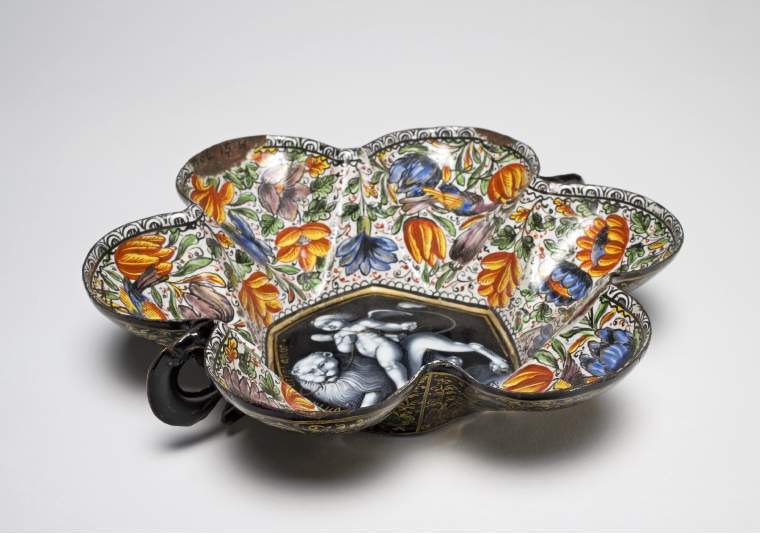 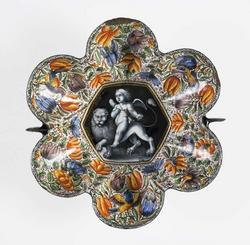 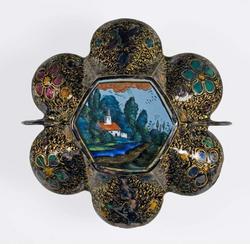 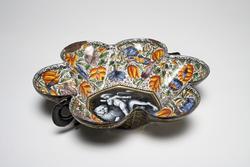 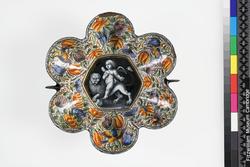 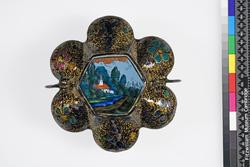 Copper decorated en grisaille and polychrome enamels and gilded. Cupid riding on a lion with the inscription 'omnia vinci amor (Love conquers all) and signed '‘•I•L•’; on the sides floral sprays and birds; and on the back a central landscape, surrounded by stylized floral sprays.

Copper, raised, and decorated in three techniques: enamelling en grisaille on a black ground and gilded; enamelling in blue, green, yellow, orange-red, pale manganese/mulberry, and black on a white ground; and enamelling in blue, turquoise, green, yellow, and mulberry translucent enamels over silver foils in a black ground, and gilded. The hexafoil bowl has lobed sides rising from a slightly convex hexagonal base, and two small S-shaped handles on opposing sides. In the middle, framed by two gold lines is a hexagonal panel executed in grisaille on a black ground of Cupid riding on a lion walking to the left. Cupid has a quiver of gold arrows slung on his back by a gold strap, and controls the lion by means of a gold leash passing through its mouth. The lion has gold toe nails and some of Cupid’s wavy hair is gold. On the left edge ‘omnia uinci amor’(Love conquers all) is inscribed in gold The initials ‘•I•L•’ in black are inscribed in front of the lion’s left rear paw. The sides have a white ground decorated with blue, pale mulberry, and red and yellow flowers on black stems with green foliage, amongst which, on three lobes, there is a fanciful bird. Round the rim is a border of black petals with vertically striated semi-circular centres.
On the hexagonal base framed by black and gold lines there is a landscape in which is a white house with a red roof beside a stream, with a clump of trees behind it. Four small flocks of birds fly through the opaque pale blue sky. The black sides are decorated with stylized flowers and gold foliage, amongst which, on two lobes, is a fanciful bird in translucent enamels over silver foils. The handles are black with remnants of a gold line following its S-shape.

Cupid riding a lion, emblematic of the power of Love, accompanied by the inscription ‘omnia vincit amor’ from Virgil’s Eclogues, X, 69: ‘omnia vincit Amor: et nos cedamus Amori.’ (Love conquers all; let us, too, yield to Love’) occurs on two more hexafoil bowls: in the Fitzwilliam (M.3-1928), and the Musée Municipal de l’Évêché, Limoges (Inv. 101); and on three with circular rims in the the Ashmolean Museum (OA 248), and the Victoria and Albert Museum (C.23-1923), and the Musée des Beaux-Arts, Dijon (CA T 1322). The shape of another, formerly in the Königliche Kunstkammer Berlin, (Inv. I.G.179), but now lost is not certain, but may have been of hexafoil form as it was not desribed as having a footring.

Small two-handled bowls or cups with hexafoil or circular rims have survived in large quantities. Most of them are decorated on the base with a landscape, surrounded by stylized flowers and birds in translucent enamels over foils in a black ground embellished with gold foliage. Others have floral decoration on a white ground.The central medallion inside may be of a religious, classical, or other secular subjects, and the interior sides are usually decorated with polychrome flowers and birds on a white ground in either a continuous band or in panels. Many of them bear the initials ‘.I.L.’ and these have usually been attributed to Jacques Laudin I (c. 1627-95), for example by Darcel and Marquet de Vasselot, although it is possible that some of them were executed by his nephew Jacques II Laudin (c. 1663-1729). However, the decoration of the reverse of the Fitzwilliam’s bowl, resembles that on other pieces attributed to Jacques I Laudin.