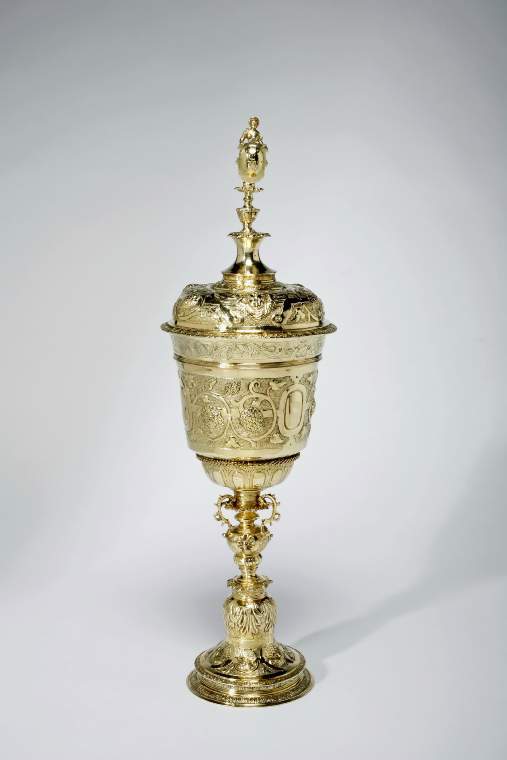 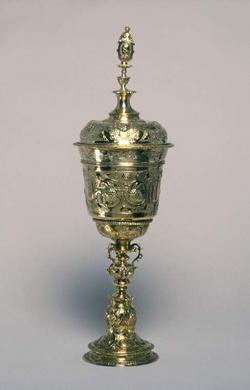 Silver-gilt, the deep U-shaped bowl has a slightly everted rim, and tucks in near the base. The bowl is divided into three areas, the first is the rim which is engraved with a delicate border of strapwork containing flowers and scrolling foliage. Beneath this is a moulded girdle, then a wide border of embossed and chased strapwork contining empty cartouches, grapes and scrolling foliage on a scalework ground. An applied rope border separates the last area which is embossed and chased with gadroons. The knopped stem is embossed and engraved and has three applied scroll brackets and three lions' masks. The bell-shaped foot is embossed and chased with acanthus leaves and strapwork containing sea monsters, grapes and scrolling foliage on a scalework ground. It stands on two foot rings with cast decorative borders. The domed cover (A) is similarly decorated but is also embossed with three winged angels' heads. The ornate knop supports a cast finial of a femaile holding a shild with is engraved with the monogram 'A' over 'C' over 'WK'.

The mark of initials IE, a bugle horn and three pellets below, in plain shield has been attributed to John Evans who had become free of the Goldsmiths' Company before 1691 and died before 1619