The Lord's Prayer I: Christ teaching the Disciples how to Pray: M.49A-1904 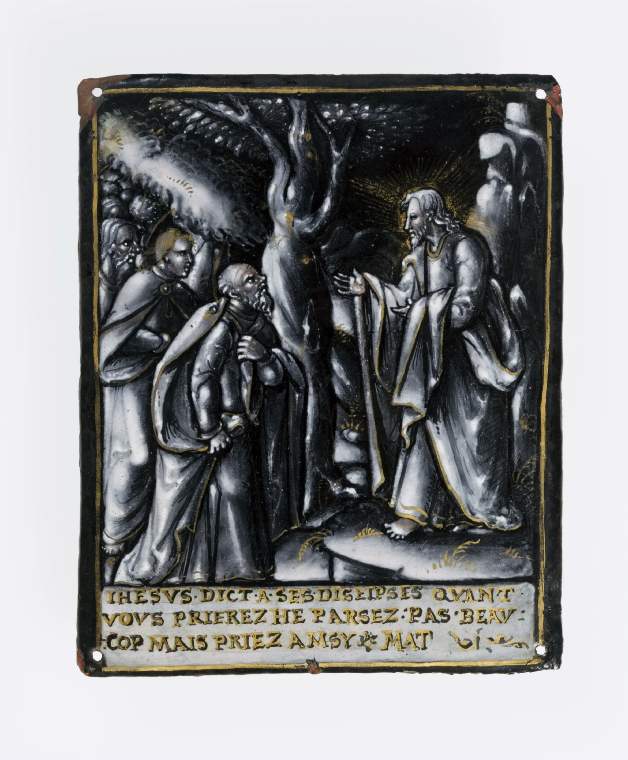 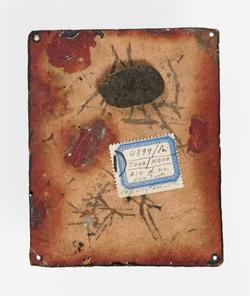 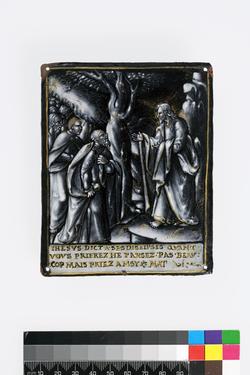 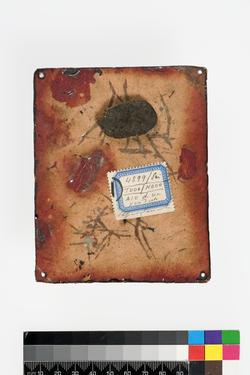 The Lord's Prayer I: Christ teaching the Disciples how to Pray

Rectangular copper plaque enamelled en grisaille with a little flesh pink and red on a black ground, and gilded. Christ teaching the disciples how to pray, inscribed below, 'IHESVS• DICT•A•SES•DISEIPSIES QVANT/VOVS PRIEREZ HE PARSEZ: PAS•BEAV:/COP MAIS PRIEZ AMSY (sprig) MAT V'1. One of a set with M.49B-F-1904

Rectangular copper convex plaque with a small hole in each corner, enamelled en grisaille with a little flesh pink on a black round, and gilded. Clear, unevenly applied clear counter-enamel. Christ stands on a flat rock on the right addressing his disciples who stand slightly below him in a group on the left. He is barefooted, and has a gold aureole, long hair, and a beard, and wears a long gown with a cloak over it. The first disciple on the left, probably St Peter, is old and bearded, and wears a long gown with a cloak which he holds up in his right hand and clutches to his chest with his left hand. The disciple behind him, probably St John, is younger and clean-shaven with golden hair, and wears a long gown and cloak fastened together over his chest with a brooch. The head of another disciple is shown behind him, but only the tops of the heads of the rest of the group behind them are shown. A large tree stands in the background between Christ and the disciples. Gold lines run round the edges of their clothing, and there are small gold plants on the rock and beyond the tree, which is entwined by a delicate gold vine. A white panel running across the bottom of the plaque is inscribed in black with gilding over it ‘IHESVS• DICT•A•SES•DISEIPSIES QVANT/VOVS PRIEREZ HE PARSEZ: PAS•BEAV:/COP MAIS PRIEZ AMSY (sprig) MAT V1’ (Jesus said to his disciples ‘When you pray do not speak too much but pray thus’ Matthew V1) . A gold line runs round the edge of the scene and inscription. The reverse is painted in black with the number ‘1’.The plaque is set in an ill-fitting, rectangular, gilt-metal frame with repeating formal leaf border. The plaque is held into the frame by four bent over pins attached to the cardinal points on the reverse.

The scenes in the series were inspired by a set of metalcuts by the Basel monogrammist C.V. after Holbein which appeared in Desiderio Erasmus's 'Precatio dominica in septem portiones', published by both Johann Froben and Johannes Bebel successively in Basle in 1524. The work was first published without illustrations in 1523, and was rapidly translated into modern languages. The illustrations in the Froben and Bebel editions have the inscriptions in Latin, but a set of eight prints issued separately a little later with inscriptions in French, signed CV, is in the British Museum (1904,0206. 64.1-8;) and seven of the set (no. 4 is missing) are in the Cabinet des Estampes, Bibliothèque nationale, Paris (EA 25c in fol., p. 57). A French translation of 'Precation dominica' was not published, and the rarity of the prints with French text, makes it seem more likely that Colin Nouailher, had access to an illustrated Latin edition. The inscriptions on the plaques attributed to Nouailher do not exactly match all lines of the cuts with French text. While the iconography of all the plaques was derived from these prints, the details differ considerably, in some scenes more than others. See Documentation. The style of the figures on the plaque of 'Christ instructing his disciples how to pray' also has affinities with the first of a series of different illustrations to the Lord’s Prayer, initialled I.F. (Jacob Fabers), published in Jean Mallard’s 'Le Premier recueil des oeuvres de la muse cosmopolitique, laquelle par ses artz gentilz guerit toute ladrerye . '.. Paris, (Jean Loys et Jérome de Gourmont), undated, c. 1540-47.

The series was attributed to Colin Nouailher by Alfred Darcel (1867) and his attribution was upheld by J.J. Marquet de Vasselot (1919-20) and Sophie Baratte (2000). This attribution is confirmed by the presence of the initials CN below the title on a plaque from the Lord’s Prayer decorated with the 'Deliver us from Evil' scene, acquired by the Musée de l’Évêché, Limoges, in 2007 (2007.5.2) with another plaque of the 'Give us our daily bread' scene (2007.5.1). That museum is now the Musée des Beaux-Arts, Limoges.

This plaque was originally the first of a set of eight illustrating the Lords Prayer of which six are in the Fitzwilliam (M.49A-F-1904). The second and fourth plaques are missing. The first plaque shows Christ instructing his disciples how to pray (Matthew, VI, 6-7), and the others have scenes associated with the lines of the Lord's Prayer which follows (Matthew, VI, 8-13). The words are written in French at the bottom of each plaque. The subject of the first plaque is shown out-of-doors, because this passage in the Gospel forms part of the Sermon on the Mount. At least two other plaques of this subject are known, see Documentation. 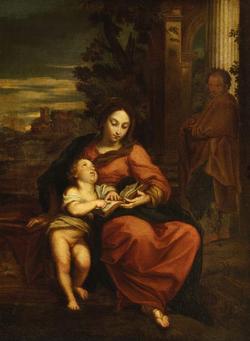 The Virgin teaching the infant Christ to read 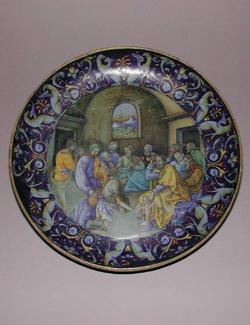 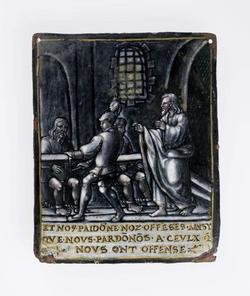 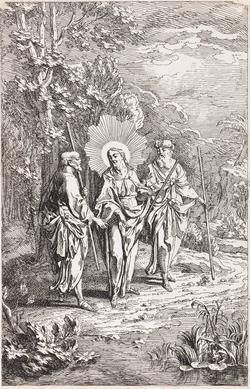 Christ on the road to Emmaus with two disciples

Volunteering as an Explainer

Volunteering with the MAA Education Team