Silver, tortoiseshell and steel; two steel tines on a pistol grip handle with scales of embossed silver plaques and tortoiseshell

Silver, tortoiseshell and steel; the fork has two long tines and a short octagonal stem of steel; each side of the pistol grip handle has scales formed from three bands of embossed silver and two of tortoiseshell; the lowest band depicts a soldier with a raised sword, the middle band depicts a stag, and the terminal is embossed with scrolling foliage on a matted ground; each tortoiseshell band is held on by a central silver boss. The steel bolster is engraved with the coat-of-arms of Saxony, and the flat top edge is of steel cut in a geometric pattern.

From the Frank Smart Collection, given by T.J.G. Duncanson 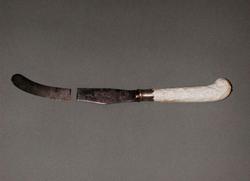 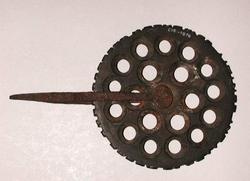