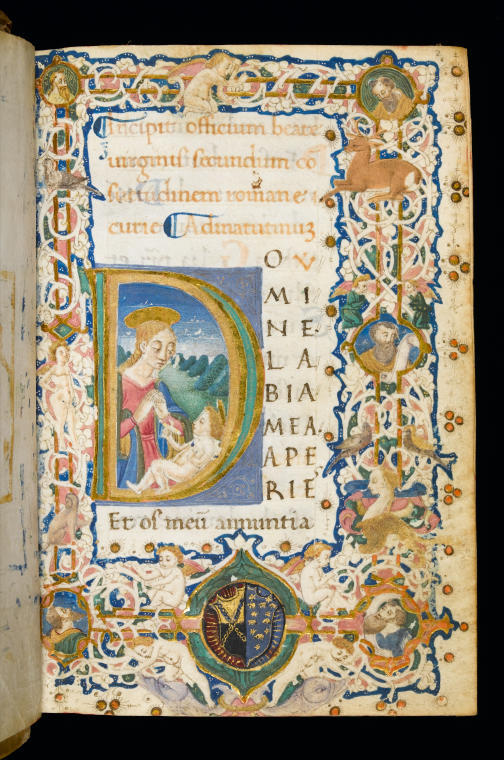 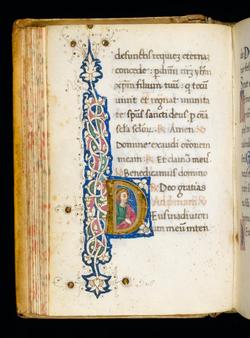 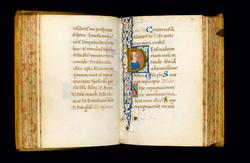 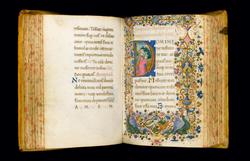 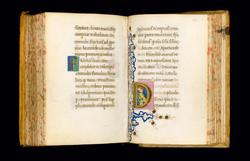 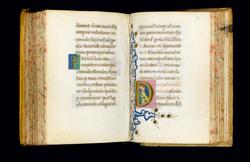 CONTENTS:
fols. 1r-88v Hours of the Virgin, with variants for Advent and other seasons (imperfect, missing end of Terce and beginning of Sext, end of Sext and beginning of None)
fol. 89r Formula for blessing before and after reading the lessons
fols. 90r-118v Penitential Psalms and Litany
fols. 119r-169v Office of the Dead
fols. 179v-182r Short Hours of the Cross (begins imperfectly, missing Matins to Terce), with rubricated indulgence of Pope John XXII
fols. 182v-215v Hours of the Passion (begins imperfectly)

DECORATION: Three large historiated initials formed of gold, blue, green and pink bands on blue grounds with delicate white floral patterns, and full borders: fol. 2r Hours of the Virgin, Matins, [D, 7 ll.] Virgin adoring the Child who is holding a bird and reclining in the lower curve of the initial, with full white vine-scroll border on blue, green and pink ground sprinkled with triple white dots, surrounded by spraywork with gold balls, and containing birds, putti, a stag, a female bust, five medallions with busts of prophets linked by gold bars, and a laurel wreath in the lower border supported by two dolphins and enclosing a shield of unidentified arms (per fess or and sable, two chains in saltire counterchanged or and azure; possibly a variant of the arms of the Alberti family), impaling the arms of the Ricci (azure semé of stars and hedgehogs); fol. 90r Penitential Psalms, [D, 6 ll.] David penitent, with full floral border containing putti, birds, mythical hybrids, a classicizing vase supported by two rabbits, three busts of prophets within medallions linked by interlaced gold bars, and a quatrefoil showing David beheading Goliath in the lower border; fol. 119r Office of the Dead, [V, 6 ll.] Half-length skeleton, with full white vine-scroll border containing putti, birds, animals, two skulls in medallions, and, in the lower border, a coffin covered by a pall, with three clerics chanting from a book.

Pen drawing of the sacred monogram YHS within a decorative medallion (fol. 88v).

History note: Probably made for a marriage alliance between the Ricci and Alberti families of Florence (partially identified arms on fol. 2r); Alfred Aaron de Pass (1861-1952); his gift, 1933.

Method of acquisition: Given (1933) by Pass, Alfred Aaron de